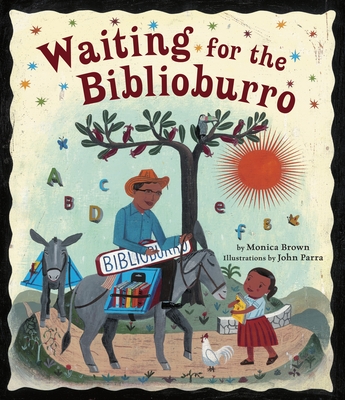 Waiting for the Biblioburro

Ana loves stories. She often makes them up to help her little brother fall asleep. But in her small village there are only a few books and she has read them all. One morning, Ana wakes up to the clip-clop of hooves, and there before her, is the most wonderful sight: a traveling library resting on the backs of two burros‑all the books a little girl could dream of, with enough stories to encourage her to create one of her own.

Inspired by the heroic efforts of real-life librarian Luis Soriano, award-winning picture book creators Monica Brown and John Parra introduce readers to the mobile library that journeys over mountains and through valleys to bring literacy and culture to rural Colombia, and to the children who wait for the BiblioBurro.

A portion of the proceeds from sales of this book was donated to Luis Soriano's BiblioBurro program.

Praise For Waiting for the Biblioburro…

Review, School Library Journal, June 1, 2011
"The pleasure and love of reading are joyfully brought forth in this simple, happily rendered tale."

Starred Review, Kirkus Reviews, June 15, 2011
"Parra’s colorful folk-style illustrations of acrylics on board bring Ana’s real and imaginary worlds to life...The book is perfect for read-alouds, with occasional, often onomatopoeic Spanish words such as “quiquiriquí,” “tacatac” and “iii-aah” adding to the fun."

Review, Publishers Weekly, May 9, 2011
"Parra's naïve-styled acrylics brim with scenes of country life. A palette of salmon pinks and turquoise and sky blues, painted on board, give the book a rough-hewn, handmade quality and an innocent, childlike appeal (with her wide face, delicate features, and rouged cheeks, Ana even resembles a porcelain doll). In a metafictional ending, readers will notice that the book Ana hands the bibliotecario upon his return is this very book--fitting, as this truly is Ana's story."

Review, The Horn Book, July/August 2011
“This sample of the impact of traveling librarians on rural children, inspired by a Colombian teacher-librarian, not only celebrates their work but eloquently portrays a matchless way to inspire learning: by feeding the natural hunger for story....Small, brown-faced Ana’s enthusiasm is contagious, and the satisfying denouement, in which she donates her homemade book to the traveling collection, is just right."

MONICA BROWN's Peruvian-American heritage has inspired in her a desire to share Latino/a stories with children. Her books have garnered starred reviews, The Américas Award, and a Pura Belpré Honor. In addition, she received the prestigious Rockefeller Fellowship on Chicano Cultural Literacy from the Center for Chicano Studies at the University of California. Monica is currently Professor of English at Northern Arizona University in U.S. Latino and Multicultural Literature.

JOHN PARRA is an award-winning illustrator, designer, teacher, and fine art painter whose work is avidly collected. John’s books have received starred reviews and have appeared on the Texas 2x2 Reading List. He has received the SCBWI Golden Kite Award for illustration, the 2006 International Latino Book Award for Best Children’s Book Interior Illustrations, and the 2010 Pura Belpré Illustrator Honor Award for Gracias/Thanks, written by Pat Mora.
Loading...
or support indie stores by buying on