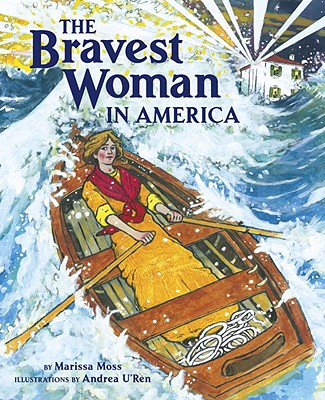 The Bravest Woman in America

Ida Lewis loved everything about the sea, so when her father became the official keeper of Lime Rock Lighthouse in Newport, Rhode Island, she couldn’t imagine anything better.

Ida felt ready for anything—and she was.

Award-winning author Marissa Moss pairs up with award-winning illustrator Andrea U’Ren in a stunning collaboration that sheds light on a remarkable piece of history. Based on the true story of Ida Lewis, who was dubbed “the Bravest Woman in America” and who was recognized with the Congressional Life Saving Medal and the American Cross of Honor, this inspiring and unforgettable tale of courage and real-life heroism is a tribute to brave women everywhere.


Praise For The Bravest Woman in America…

Review, The Horn Book, July/August 2011:
"The stirring events are beautifully visualized in U’Ren’s painterly watercolor, ink, and acrylic art: dark blues and greens suggest profound depths beneath waves that splash exuberantly under a luminous, ever-changing sky; the Lewis family brims with character and energy while Ida herself exudes good humor and determination; and the pivotal rescue is taut with compassion as well as drama. Altogether, this is an inviting introduction to a bygone but ever-intriguing profession."

Review, The Wall Street Journal, July 16, 2011:
"...in Marissa Moss's telling, and with Andrea U'Ren's rich, color-soaked illustrations, Ida's good cheer, moxie and resourcefulness evoke the work ethic of her time as much as her own intrepidness."


ANDREA U'REN is the author and illustrator of many books for children, including Mary Smith; Pugdog; Stormy's Hat, Just Right for a Railroad Man, written by Eric Kimmel; One Potato, Two Potato, written by Cynthia DeFelice; and Feeding the Sheep, written by Leda Schubert. She studied illustration at the Rhode Island School of Design and The Cooper Union.
Loading...
or
Not Currently Available for Direct Purchase