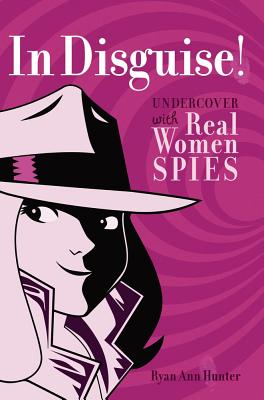 Investigate real-life adventures of espionage in this collection of impressive and inspiring profiles.

Spanning more than 300 years and numerous countries, In Disguise! details the lives of some of history’s most daring women, all of whom risked their lives to stand up for their beliefs. Originally published a decade ago, this fully updated and expanded edition of In Disguise! profiles twenty-eight daring international secret agents, from Harriet Tubman, who freed hundreds of slaves during the Civil War, to Eva Wu, who hid secret messages in her hair to aid the Chinese Revolution, to the modern-day exploits of former CIA agent Valerie Plame. With riveting narratives, fun quizzes to determine if you have what it takes to go undercover, secret-agent trivia, and short spotlight bios, In Disguise! is sure to engage and inspire.

A native of North Carolina, Jeanette Little is an artist and illustrator living and working in Portland, Oregon. She received her BFA in painting from East Carolina University and then studied in the University of Oregon's MFA painting program. Her work has appeared in several publications as well as on national television. She has exhibited across the United States and has pieces in private collections from New York to Los Angeles.
Loading...
or support indie stores by buying on
(This book is on backorder)