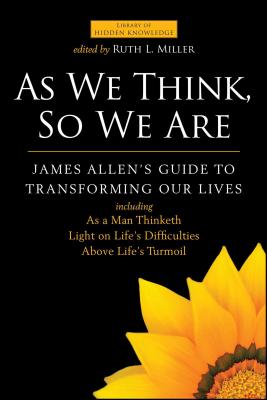 As We Think, So We Are

Discover a fresh and accessible interpretation of the century-old work of James Allen, one of the founders of the self-help movement.

As We Think, So We Are, the fifth book in the Library of Hidden Knowledge, invites you to explore the pioneering teachings of James Allen and apply them to your own life.

Dr. Ruth Miller offers modern interpretations of three of Allen’s most insightful essays: As We Think, Light on Life’s Difficulties, and Above Life’s Turmoil. Using clear, concise language paired with practical applications, Miller creates an accessible way to delve into and explore the fundamental processes that determine how we interact with—and understand—the world.

Allen’s seminal theories in metaphysics introduced millions in the last century to the Law of Attraction, one of the most transformative paths to fulfillment in the modern age. In As We Think, So We Are, we find Allen’s writing to be as important and life changing today as it was a hundred years ago.

Born in 1864 in England, James Allen took his first job at fifteen to support his family. Allen worked as a factory knitter and later a private secretary before writing his first book, From Poverty to Power, in 1901. In 1903 he completed his best-known work: As a Man Thinketh. Allen wrote nineteen books, including his spiritual journal, The Light of Reason, before he died at age forty-seven in 1912. While not widely known during his lifetime, Allen later came to be seen as a pioneer of contemporary inspirational literature.

Ruth L. Miller served as associate professor at San Jose State University and as Director of Curriculum and Evaluation for Rogue Community College. She was ordained in the New Thought tradition and became the pastor of the Lifeways Center in Portland, Oregon. She is currently a traveling preacher, serving New Thought and Unitarian-Universalist churches in Oregon, Washington, and California.
Loading...
or
Not Currently Available for Direct Purchase