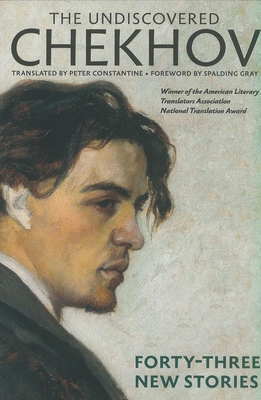 The Undiscovered Chekhov gives us, in rich abundance, a new Chekhov. Peter Constantine's historic collection presents 38 new stories and with them a fresh interpretation of the Russian master. In contrast to the brooding representative of a dying century we have seen over and over, here is Chekhov's work from the 1880s, when Chekhov was in his twenties and his writing was sharp, witty and innovative.
Many of the stories in The Undiscovered Chekhov reveal Chekhov as a keen modernist. Emphasizing impressions and the juxtaposition of incongruent elements, instead of the straight narrative his readers were used to, these stories upturned many of the assumptions of storytelling of the period.
Here is "Sarah Bernhardt Comes to Town," written as a series of telegrams, beginning with "Have been drinking to Sarah's health all week! Enchanting! She actually dies standing up!..." In "Confession...," a thirty-nine year old bachelor recounts some of the fifteen times chance foiled his marriage plans. In "How I Came to be Lawfully Wed," a couple reminisces about the day they vowed to resist their parents' plans that they should marry. And in the more familiarly Chekhovian "Autumn," an alcoholic landowner fallen low and a peasant from his village meet far from home in a sad and haunting reunion in which the action of the story is far less important than the powerful impression it leaves with the reader that each man must live his life and has his reasons.

“This is a delicious volume . . . [The stories] show the reader the city and the period the author captured with his pen, and the effervescent magic of which the young man was capable. These are worth of discovery.” –The Times of London

ANTON CHEKHOV (1860–1904) is regarded as one of the world’s masters of the short story. The son of a hapless shopkeeper and grandson of a former serf, Chekhov began at the age of twenty to support his family through the publication of magazine pieces. The writing of these short works—many of which were collected in English for the first time in Seven Stories’ Undiscovered Chekhov—served as the author’s apprenticeship in literature, which was undertaken simultaneously with his studies to become a medical doctor. Both of these educations would leave their mark on the rising author. By the 1890s Chekhov had moved on to weightier journals, and he had drifted away from the practice of medicine; but his work would always be characterized by the copywriter’s vividness and the sober exactitude of a scientist. In an age of literary aristocrats, Chekhov did as much as any modern writer to democratize the profession. He used his talent to examine the lives of street urchins, déclassé provincials, and frustrated reformers. By the time of his death from tuberculosis in 1904, all Russia and much of the world had taken heed of his credo: “For chemists there is nothing unclean on the earth. The writer must be as objective as the chemist.”

Translator PETER CONSTANTINE is the author of many books on the languages and cultures of the Far East. He is the translator of the complete stories of Isaac Babel and lives in New York City.
Loading...
or
Not Currently Available for Direct Purchase