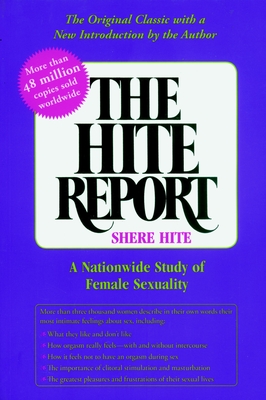 A Nationwide Study of Female Sexuality

Praise For The Hite Report: A Nationwide Study of Female Sexuality…

“A frankness and directness not usually seen in print … Many female readers can closely identify with these intimate revelations.” –Time


“The first major literary breakthrough in this field since the work of Masters and Johnson.” –The Literary Guild

SHERE HITE, one of the great feminists and cultural anthropologists of our time, is internationally recognized for her work on psychosexual behavior and gender relations. Hite has lectured at universities around the world including the Sorbonne, Harvard, Columbia, Cambridge, Oxford, the London School of Economics, and others. Hite also writes regularly for international newspapers and journals. Director of the National Organization for Women’s feminist sexuality project from 1972 to 1978, since that time she has directed Hite Research International. Her continuing study of sexual behavior includes major new discoveries on, for example, male sexuality, teen sexuality, and the relationship of sexuality to globalization. The Hite Report, first published in 1976, has sold tens of millions of copies worldwide.
Loading...
or support indie stores by buying on
(This book is on backorder)