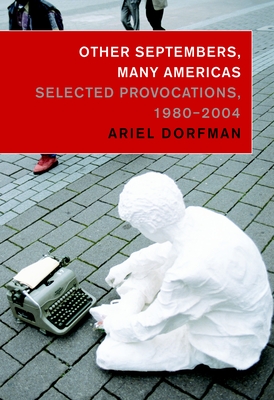 Other Septembers, Many Americas

"Let me tell you, America, of the hopes I had for you," Dorfman writes after the fall of the Twin Towers, remembering back to an earlier September 11 in 1973, when he was on the staff of Salvador Allende, then president of Chile, the day he was removed from office and murdered in a coup in which the U.S. government was complicit. "Beware the plague of victimhood, America . . . Nothing is more dangerous than a giant who is afraid."
Included in Other Septembers, Many Americas are major essays about the America south of the border, exploring the ambiguous relationship between power and literature and touching on topics as diverse as bilingualism, barbarians, and video games. In the essay "A Different Drum," Dorfman asks, "Isn’t it time, as war approaches yet again, to tell each other stories of peace over and over again?" Over and over in these jewel-like essays, his best shorter work of the last quarter-century, Dorfman weaves together sentiment and politics with his sense of the larger historical questions, reminding Americans of our unique role in the world, so different from the one put forward by the current administration: the power to resist and to imagine.

Praise For Other Septembers, Many Americas: Selected Provocations, 1980#2004…

"Over the years, Ariel Dorfman has written movingly and often brilliantly of the cultural dislocations and political fractures of his dual heritage. Dorfman has, in an impressive body of work, done justice to the two languages that have battled for his voice and the two countries that claim his allegiance." –Shashi Tharoor, New York Times Book Review

ARIEL DORFMAN is considered to be one of “the greatest Latin American novelists” (Newsweek) and one of the United States’ most important cultural and political voices. Dorfman's numerous works of fiction and nonfiction have been translated into more than thirty languages, including Death and the Maiden, which has been produced in over one hundred countries and made into a film by Roman Polanski. Dorfman has won many international awards, including the Sudamericana Award, the Laurence Olivier, and two from the Kennedy Center. He is distinguished professor at Duke University and lives in Durham, North Carolina.
Loading...
or
Not Currently Available for Direct Purchase