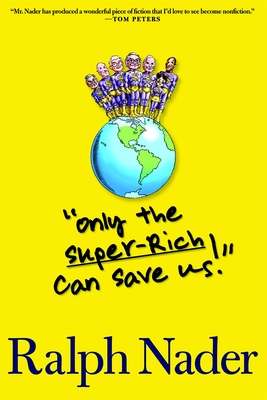 Only the Super-Rich Can Save Us!

"In the cozy den of the large but modest house in Omaha where he has lived since he started on his first billion, Warren Buffett watched the horrors of Hurricane Katrina unfold on television in early September 2005. . . . On the fourth day, he beheld in disbelief the paralysis of local, state, and federal authorities unable to commence basic operations of rescue and sustenance, not just in New Orleans, but in towns and villages all along the Gulf Coast. . . He knew exactly what he had to do. . ."

So begins the vivid fictional account by political activist and bestselling author Ralph Nader that answers the question, "What if?" What if a cadre of superrich individuals tried to become a driving force in America to organize and institutionalize the interests of the citizens of this troubled nation? What if some of America's most powerful individuals decided it was time to fix our government and return the power to the people? What if they focused their power on unionizing Wal-Mart? What if a national political party were formed with the sole purpose of advancing clean elections? What if these seventeen superrich individuals decided to galvanize a movement for alternative forms of energy that will effectively clean up the environment? What if together they took on corporate goliaths and Congress to provide the necessities of life and advance the solutions so long left on the shelf by an avaricious oligarchy? What could happen?

This extraordinary story, written by the author who knows the most about citizen action, returns us to the literature of American social movements—to Edward Bellamy, to Upton Sinclair, to John Steinbeck, to Stephen Crane—reminding us in the process that changing the body politic of America starts with imagination.

Praise For Only the Super-Rich Can Save Us!…

"This tale has a moral substance and political content that is quite relevant for our time!" —Cornel West

"A breakthrough book that sparks the imagination and inspires us to think about the political economy our country deserves." —Rose Ann Demoro, executive director, California Nurses Association

"Ralph Nader, the consumer activist and corporate scourge, is saying nice things about the kind of folks you'd expect him to despise ... worthy of a billionaire's portfolio." —Hillel Italie, Associated Press

"With his new book, Ralph Nader—always the iconoclast and visionary—has created a new genre. ... How many leftist books leave you feeling hopeful, even optimistic? How many offer you a picture of a new world that inspires you to act? ... A genuine creative leap in genre and substance." —Tikkun Magazine Review

Born in Connecticut in 1934, RALPH NADER has spent his lifetime challenging corporations and government agencies to be more accountable to the public. His 1965 book Unsafe at Any Speed permanently altered the course of a reckless U.S. automobile industry and made Nader a household name. His lobbying and writing on the food industry helped to ensure that the food we buy is required to pass strict guidelines before reaching the consumer. One of Nader’s greatest achievements was his successful lobbying for a 1974 amendment to the Freedom of Information Act, which gave increased public access to government documents. Over the years he has co-founded the public interest groups Public Citizen, Critical Mass, Commercial Alert, and the Center for the Study of Responsive Law. His 2000 presidential campaign on the Green Party ticket served to broaden the scope of debate on the nation’s priorities. Named by the Atlantic as one of the hundred most influential figures in American history, Nader continues to be a relentless advocate for grassroots activism and democratic change. He lives in Washington, D.C.