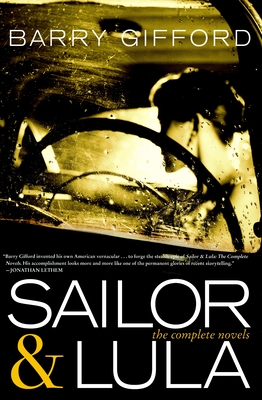 On the twentieth anniversary of the publication of Barry Gifford's international bestseller, Wild at Heart, as well as the anniversary of the Palme d'Or–winning film adaptation by director David Lynch, Sailor & Lula: The Complete Novels presents all of the novels and novellas that comprise the saga of Sailor Ripley and Lula Pace Fortune, "the Romeo and Juliet of the South": Wild at Heart, Perdita Durango (also made into a feature film), Sailor’s Holiday, Sultans of Africa, Consuelo’s Kiss, Bad Day for the Leopard Man, and The Imagination of the Heart.

"I saw Sailor and Lula in love in the middle of a crazy, violent, wild world, and I wanted to go on that trip with them … It's like looking into the Garden of Eden before things went bad." –David Lynch

"Barry Gifford is now more than forty years and forty books into his career, yet still no one seems to know what to do with him … The experience of reading Gifford is like starting a car and realizing, too late, that someone has cut its brake lines. A spectacular wreck is imminent, so you might as well enjoy the adrenaline rush … The thrill of the Sailor & Lula books is in seeing how horribly a human life—or an entire society—can spiral out of control. But the gruesome dismemberments, car wrecks, and point-blank gunshots only entertain for so long. The image that lingers in the reader's imagination, long after the series ends, is far more sedate and ordinary: Sailor and Lula, embracing in a cheap motel bed, telling each other stories to ward off the nightmares that they know will come." –Nathaniel Rich, New York Review of Books

"There are precious few literary landscapes where this particular sort of true romance burns as hot and sweet and altogether cool as in Gifford's sprawling, epically Southern gothic novels … a pulpy, meridianal meditation on love and death in the dirty South, hugely entertaining and often frenzied in their depiction of Sailor and Lula's misadventures into random, swampy chaos but also written in the kind of watertight, blunt-edged prose that recalls Jim Thompson filtered through some awesomely hyper-Americanized hybrid of Fellini and Katherine Dunn … Too cool." –Marc Savlov, Austin Chronicle