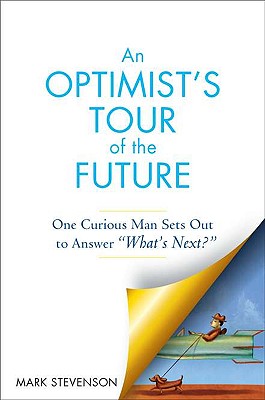 AN Optimist's Tour of the Future

One Curious Man Sets Out to Answer "What's Next?"

In the tradition of Bill Bryson's "A Short History of Nearly Everything," a smart and entertaining guide to the future of civilization
When unexpectedly confronted with his own mortality, Mark Stevenson-a writer, deep-thinker, and stand-up comedian-began to ponder what the future holds for our species. "The past is a foreign country," writes Stevenson. "By my analysis it's a bit like France-in that I've been to parts of it and eaten some nice food there. But the future? The future is an unknown territory-and there isn't a guidebook." Thus, his ambition was born.
Stevenson set out simply, asking, "What's next?" and then traveled the globe in pursuit of the answers. Along the way, he visited the Australian outback to visit the farmers who can save us from climate change, met a robot with mood swings, and talked to the Spaniard who's putting a hotel in space. While some might be overwhelmed, or even dismayed by the looming realities of genome sequencing, synthetic biology, a nuclear renaissance, and carbon scrubbing, Stevenson remains, well, optimistic. Drawing on his singular humor and storytelling to break down these sometimes complicated discoveries, "An Optimist's Tour of the Future" paints a wonderfully readable, and completely enthralling portrait of where we'll be when we grow up- and why it's not so scary.
Watch a Video


Praise For AN Optimist's Tour of the Future: One Curious Man Sets Out to Answer "What's Next?"…

"Quite simply one of the funniest, cleverest, and most naturally gifted stand ups I've ever seen."
-Jack Milner

"With warmth and humour Mark can put a panel of experts and an audience at ease and turn dry data into accessible entertainment."
-Institute of Psychiatry

"A unique talent for communicating science in a funny, charming, and accurate way. Highly recommended."
-Dana Alliance for the Brain

"A passionate advocate for science, an innovative approach, a great sense of humour, and the ability to make the mundane seem much more interesting."
-Royal College of Surgeons

Mark Stevenson is codirector of Flow Associates, Britain's most respected cultural learning consultancy, and ReAgency, a leading organization that promotes science communication. He lives in London.