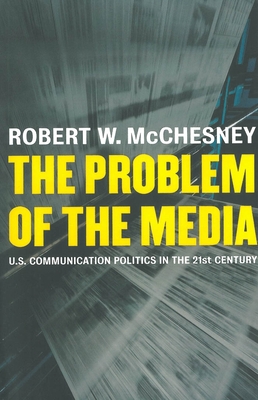 The Problem of the Media

The symptoms of the crisis of the U.S. media are well-known--a decline in hard news, the growth of info-tainment and advertorials, staff cuts and concentration of ownership, increasing conformity of viewpoint and suppression of genuine debate. McChesney's new book, The Problem of the Media, gets to the roots of this crisis, explains it, and points a way forward for the growing media reform movement.
Moving consistently from critique to action, the book explores the political economy of the media, illuminating its major flashpoints and controversies by locating them in the political economy of U.S. capitalism. It deals with issues such as the declining quality of journalism, the question of bias, the weakness of the public broadcasting sector, and the limits and possibilities of antitrust legislation in regulating the media. It points out the ways in which the existing media system has become a threat to democracy, and shows how it could be made to serve the interests of the majority.
McChesney's Rich Media, Poor Democracy was hailed as a pioneering analysis of the way in which media had come to serve the interests of corporate profit rather than public enlightenment and debate. Bill Moyers commented, If Thomas Paine were around, he would have written this book. The Problem of the Media is certain to be a landmark in media studies, a vital resource for media activism, and essential reading for concerned scholars and citizens everywhere.