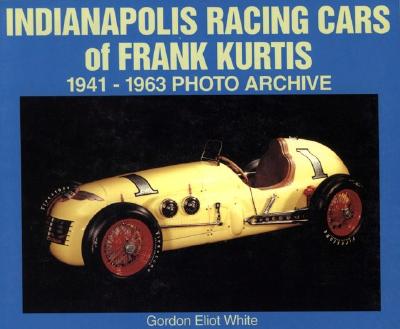 The definitive book on Kurtis championship cars, showcasing all 111 full-size ''champ'' cars that Frank Kurtis built between 1941 and 1963. Most of these cars were built specifically to race at Indianapolis. In fact, Kurtis' cars won the Indianapolis 500 five years out of six (1950-1955), and dominated the starting field from 1950 through 1958. Kurtis pioneered the ''roadster'' design, in which the engine was offset in the car, allowing the driver to sit much lower, reducing the height of the car and thus wind resistance. Roadsters were the last front-engine cars before the 1965 rear-engine revolution, and they are remembered with much nostalgia. Also see engineering drawings of the cars as well as dramatic starting field photos and crash photos. An appendix detailing car and engine serial numbers will add to your enjoyment.

Gordon Eliot White has been a racing fan, reporter, crewmember, driver, owner and historian for sixty years, since his father took him to see a race in 1939. He was a legman for racing broadcaster Ted Webbe in the 1940s, contributed to Illustrated Speedway News, and worked as a crewmember for his neighbor, Bill Schindler. He spent a career as a journalist, during which he won numerous journalism awards. Since he retired from newspaper work in 1988, he has served as Auto Racing Advisor at the Smithsonian Institute's National Museum of American History. White serves on the advisory board of the National Sprint Car Hall of Fame and has served on committees of the Eastern Museum of Motor Racing. White published the definitive book Offenhauser, the Legendary American Racing Engine and the Men Who Built it in 1996. He has written numerous articles on racing, maritime and aeronautical subjects.
or
Not Currently Available for Direct Purchase
Copyright © 2020 American Booksellers Association