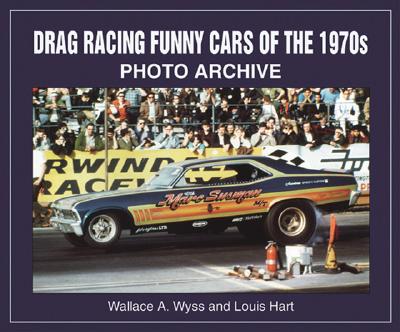 See the cars raced by many of the legendary names in drag racing, including Don Prudhomme, Tom McEuen and Jim Dunn. The authors include action shots, as well as clear, detailed "in the pits under-the-shell" shots.

Photographs show various makes and models of cars that have been reconstructed as funny cars, plus everything from stock to modified Camaros, Mustangs, Javelins, Dodge Chargers, and Firebirds, to oddball exhibition cars like the "backwards pickup."

Wallace Wyss is a native of Detroit who recalls first seeing Porsche 356 cars racing on the frozen ice of Lake Orion, Michigan. Little did he know that a half century later, he would be chronicling their history. After stints as a soldier, public relations man, and Montana cowboy (really!), he enjoyed a career as an ad copywriter, writing Corvette and Camaro ads during the original Muscle Car era. His foray into journalism began with a staff job at Motor Trend, before he set up shop as an independent author and publisher. He has published fifteen automotive histories, including the Incredible Barn Finds series (Enthusiast Books), and one novel. In 2009 he picked up a paint brush for the first time, and you can occasionally find his fine art in galleries on the West Coast. Along the way, he barn-found and restored such cars as two Mercedes gulllwings, a Ferrari 365GTC/4, and a Porsche 356 Convertible D.
Loading...
or
Not Currently Available for Direct Purchase