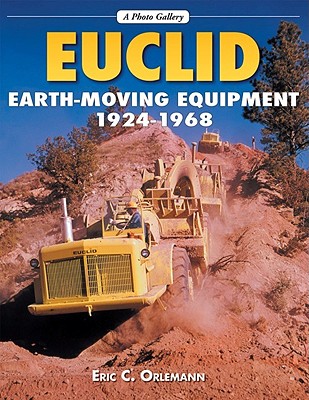 Euclid Earthmoving Equipment, 1924 to 1968, examines the company's equipment origins, starting with the Euclid Crane & Hoist Company, and The Euclid Road Machinery Company, right on through the years General Motors controlled the company as Euclid Division. All of the company's major equipment product lines are covered, including rear-dump and bottom-dump haulers, scrapers, crawler dozers, wheel loaders, and blade-veyors. Also includes numerous military offerings, prototypes, and experimental designs, some of which have never been seen in publications before. Contains tables for machine introductions and production numbers. From the serious equipment historian, to the heavy equipment enthusiast, Euclid is packed with tons of the "green-iron" for your enjoyment.

Eric C. Orlemann has worked as a professional photographer and communications specialist in the industrial advertising field for over 27 years. As the proprietor of ECO Industrial Communications, he counts many of the large earthmoving equipment manufacturers in the industry as his clients. Over the years, Orlemann has amassed one of the world’s most significant private earthmoving photographic collections. In addition to authoring or co-authoring thirteen books concerning earthmoving equipment manufacturers, and various other ultra-large earthmovers, Orlemann has contributed numerous articles to the Equipment Echoes, the Historical Construction Equipment Association’s official newsmagazine. Orlemann has also acted as a technical consultant concerning heavy equipment for various popular cable television networks including The History Channel, The Learning Channel (TLC), and The Discovery Channel.
or
Not Currently Available for Direct Purchase
Copyright © 2020 American Booksellers Association