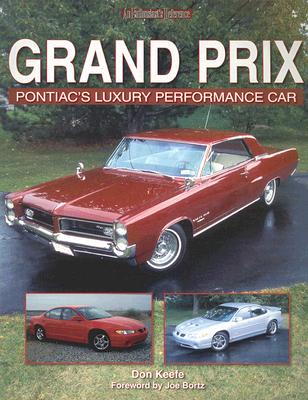 With 18 years of research on the Pontiac Grand Prix, Don Keefe takes the reader on a voyage that covers nearly a half century, from the earliest design sketches of the late 1950s, bringing the concept to market, all production figures to date, to the exciting Grand Prixs of today. Not simply a rosy depiction of the Grand Prix’s history, the author also deals frankly with the darkest days of the 1970s and 1980s, leading to its rebirth as an exciting front-drive sport coupe. Also covered are experimental, showcar, and specialty versions of the Grand Prix.

Don Keefe has been writing about cars professionally since 1988 and in that time, has become one of the leading experts on Pontiacs, as well as American experimental and non-production cars. His byline and photography have appeared in High Performance Pontiac, Collectible Automobile, Hemmings Classic Cars, The Barrett-Jackson Experience, USA Today and Pontiacracing.com. Additionally, he has written promotional material for Pontiac-GMC and TV scripts for Speed TV and has appeared on the History Channel’s Dream Machines. Don lives in western New York and is currently the editor-in-chief of Smoke Signals, the official magazine of the Pontiac-Oakland Club International.
Loading...
or
Not Currently Available for Direct Purchase