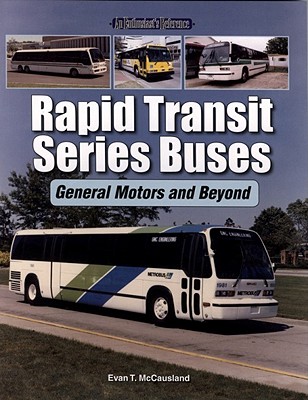 General Motors and Beyond (An Enthusiast's Reference)

General Motors wanted to revolutionize transit bus design after having success with their New Look Bus through the 1960s. Being protagonists for progress, GM's engineers created a prototype coach that would address all of the New Look's shortcomings. This RTX (Rapid Transit Experimental) was a shock to the transit industry, and it wasn't until 1977 when the better-developed RTS bus became part of the Advanced Design Bus project and was the descendant of GMC's entry in the U.S. DOT's 'Transbus' project. The RTS is notable for its curved body and window panels and has become recognized as a timeless design just like the GM New Look was. In 1987 the RTS patents were sold to Transportation Manufacturing Corporation (TMC) and then they sold the rights to NovaBus in 1994 who left the U.S. market in 2002. However, Millennium Transit Services has since revived the RTS in 2006. Here it is, the only book with the full in-depth history that is also well illustrated with time-period photography and a color section.

The son of a former GMC engineer, Evan McCausland grew up admiring the various shapes, sizes and styles of trucks produced by General Motors. As a fan of automotive history, He began volunteering at the Walter P. Chrysler Museum in high school, is a member of the Society of Automotive Historians and a student member of the Society of Automotive Engineers.
Loading...
or
Not Currently Available for Direct Purchase