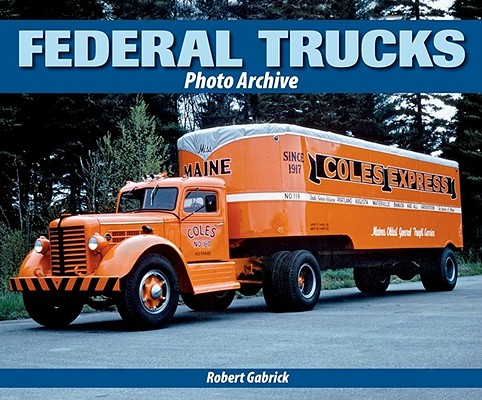 “Since 1910…Federal Trucks Have Been Known in Every Country—Sold on Every Continent.” One of the great “independents” from Detroit, Federal produced a “high quality truck at a good price.” In July 1910, Martin L. Plucher, vice president and general manager of the newly formed Federal Motor Truck Company, personally conducted the first Federal truck to Lynn, Massachusetts, for delivery to its owner. From 1910 to 1959, Federal assembled over 160,000 trucks for all types of uses including delivery vans, buses, garbage trucks, and over the road heavy haulers. Whatever its use, Federal declared, “You can expect years of faithful service.” In World War II Federal produced 11,338 military vehicles, earning the coveted Army-Navy “E Pennant” four times for production excellence. After the war Federal experienced the same difficulties experienced by other independents. Despite the 1950 introduction of the Style Liner and the restyled Golden Eagle Series, introduced in 1957, production of Federal trucks ended in 1959. This Photo Archive chronicles this admired truck through large-format archival photographs with detailed captions. See these legendary trucks once again.

An avid reader and researcher, Robert Gabrick became interested in trucks and all things mechanical at an early age. Since then Mr. Gabrick went on to become a history teacher, researcher, and writer. He has been awarded 26 separate fellowships and grants for his historical research and papers. About his current truck research, Mr. Gabrick said, "The subject is really about history...it is important to preserve the history of these topics." His latest books have earned him the well deserved nickname "The Caption King" for his well-researched, informative captions.
or
Not Currently Available for Direct Purchase
Copyright © 2020 American Booksellers Association