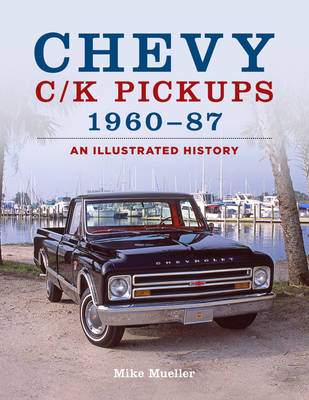 ​The first three generations (1960-1987) of Chevy’s popular C/K pickups are the most popular, affordable, and collectible pickups on the market today. High production numbers means used parts are easy to find and there is a large aftermarket for reproduction parts.

The first-generation 1960 model year of Chevy C/K pickups was launched in the fall of 1959 with a new body style and designation system. The “C” designation in front of the series number denoted a two-wheel drive system while a “K” designation indicated a 4-wheel drive setup. This new truck featured many firsts; the most important of these were a drop-center ladder frame, which allowed the cab to sit lower and the change to independent front suspension, giving the trucks an almost car-like ride.

The second-generation C/K debuted in 1967 with a major redesign that earned it the nickname “Action Line.” At this time, GM began to add comfort and conveniences to a line-up that had previously been for work purposes only. These trucks have proven extremely popular with collectors thanks to the attractive styling and excellent driveability.

The third-generation debuted in 1973 and was produced through 1987. This generation had a completely new total redesign. Due to a relatively smooth appearance created to encourage better aerodynamics and fuel economy, these trucks came to be known as the “rounded-line” generation.

Noted Chevy writer Mike Mueller combines his folksy writing style with deep research to provide the collector with an easy-to-read overview of what makes these pickups so special. In addition to detailed coverage of the three distinct generations, Chevy C/K Pickups 1960-87: An illustrated History offers shorter feature stories on the Suburban, Chevy’s compact pickups, the origin of the Blazer, and the Cameo pickup.

Mike Mueller has worked as an automotive photojournalist since 1991. A lifetime car enthusiast, Mueller has written and photographed more than 30 automotive and truck history books and contributed photography to at least that many more. His byline has appeared in countless magazines over the years, including Vette and Corvette Fever. Among his long list of titles are Motorbooks’ Chevy Chevelle 50 Years, The Complete Book of Classic Dodge and Plymouth Muscle, Camaro: 50 Years of Chevy Performance, and The Complete Book of Ford Mustang.