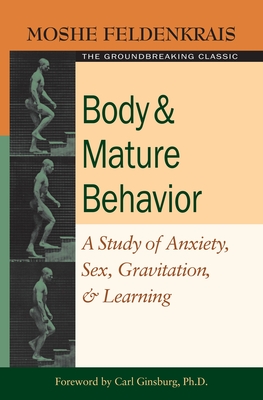 A Study of Anxiety, Sex, Gravitation, and Learning

A victim of debilitating injuries, Moshe Feldenkrais was intimately aware of the link between bodily suffering and mental health. Through healing himself, he made revolutionary discoveries, culminating in the development of the method that now bears his name. In an intellectually rich and eloquent style, Feldenkrais delves into neurology, prehistory, child development, gravity and anti-gravity, reflexive versus learned behavior, the effects of emotion, especially anxiety, on posture, and most importantly, the inseparability of body and mind.

Praise For Body and Mature Behavior: A Study of Anxiety, Sex, Gravitation, and Learning…

"Of all his books, it [Body and Mature Behavior] remains the most succinct statement of his fundamental theory: A 'whole situation,' systems view of physical movement, thought, emotion, sensation, and environment."- Mark Reese, author of a soon-to-be-published biography of Feldenkrais and co-author of Relaxercise"Body & Mature Behavior powerfully presents Moshe Feldenkrais’s masterful genius in integrating body and mind, theory and practice, nature and culture, freedom and constraint."- Richard Shusterman, professor of philosophy at Florida Atlantic University and author of Performing Live"Body & Mature Behavior is a seminal work of creative thinking in which Feldenkrais articulates the philosophical underpinnings for the development of his extraordinary approach to human growth and learning, now known as the Feldenkrais Method."- Jim Stephens PhD, PT, CFP, member of physical therapy faculty at Temple University

Moshe Feldenkrais, D.Sc., is the founder of what is today called the Feldenkrais Method. As a result of suffering debilitating injuries, Feldenkrais began an intense exploration into the relationship between bodily movement and healing, feeling, thinking, and learning. In the process of healing himself, Feldenkrais made revolutionary discoveries, culminating in the development of the method that now bears his name. There are two aspects to his method: an individual manipulatory technique of neuromotor education called Functional Integration and a group technique called Awareness Through Movement. His unique and subtle approach to facilitating human change and to improving functioning is spelled out in a number of influential books, including Awareness Through Movement, The Elusive Obvious, and The Potent Self. Dr. Feldenkrais was also the author of a number of books about Judo and one of the first Europeans to hold a black belt in the art. Today there are nearly four thousand Feldenkrais Method practitioners around the world. Moshe Feldenkrais died in 1980 and his insights continue to contribute to the development of the new field of somatic education and continue to influence disciplines such as the arts, education, psychology, child development, physical and occupational therapy, sports enhancement, and gerontology.Carl Ginsburg, Ph.D. is one of Dr. Feldenkrais’s original students and holds a Ph.D. in Chemistry. He has been involved with the Feldenkrais Method for thirty years.
Loading...
or support indie stores by buying on