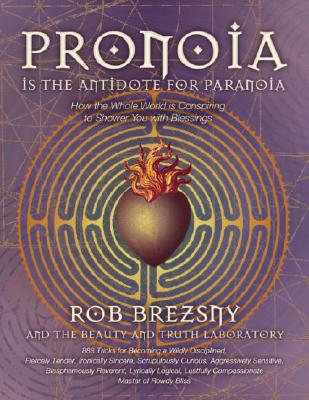 Pronoia Is the Antidote for Paranoia

How the Whole World Is Conspiring to Shower You with Blessings

Human beings are selfish, small-minded, violence-prone savages, civilization is a blight on the earth, and the rising tide of chaos ensures that everything's going to fall apart any day now. Right? Wrong, says Rob Brezsny. In Pronoia Is the Antidote to Paranoia, he declares evil is boring, the universe is friendly, and life is a sublime gift created for our amusement and illumination. This buoyant perspective is not rooted in denial. On the contrary, Brezsny builds a case for a "cagey optimism" that does not require a repression of difficulty, but rather, seeks a vigorous engagement with it. The best way to attract the blessings that the world is conspiring to give us, he insists, is to dive into the most challenging mysteries. This witty, inspiring how-to shows how any reader can become "a wildly disciplined, fiercely tender . . . lustfully compassionate Master of Rowdy Bliss."

The newly revised and significantly expanded—by more than a hundred pages—edition of Pronoia is now available (ISBN: 978-1-55643-818-9).


Praise For Pronoia Is the Antidote for Paranoia: How the Whole World Is Conspiring to Shower You with Blessings…

"I've seen the future of American literature and its name is Rob Brezsny."
- Tom Robbins, author of Another Roadside Attraction, Jitterbug Perfume, and Fierce Invalids Home from Hot Climates

"I am deeply inspired by the illuminated words of Rob Brezsny. He is a word wizard for the soul."
-SARK, bestselling author of Succulent Wild Woman and many other books

"A book so weird it might drive you stark raving sane."
-Robert Anton Wilson