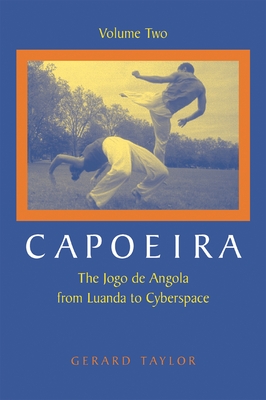 The Jogo de Angola from Luanda to Cyberspace, Volume Two

The book opens with a study of the capoeira “Bamba,” Mestre Bimba, who became renowned as a fighting champion in Bahia and opened the first legal academy during the dictatorship of Getulio Vargas. Taylor investigates the dramatic development of the schism that resulted in the competing styles of Regional and Angola. Moving into contemporary capoeira, the author provides an overview of new trends, such as international encounters, long distance “mail-order mestres,” mass membership capoeira associations, cyber-capoeira, and grading systems.

The book features the wisdom of a number of important mestres recounting their experiences teaching capoeira professionally around the world. In frank, inspiring interviews they talk about the highs and lows of the capoeira life, and how its lessons can enrich people’s lives.

Photographs, illustrations, and an extensive glossary of terms illuminate the complex history of this fighting art.

Praise For Capoeira: The Jogo de Angola from Luanda to Cyberspace, Volume Two…

“This book is living proof that capoeira isn’t only movements. It shows us that the culture of capoeira is very rich in the full context. Before that which our eyes see, before a kick, or an acrobatic movement, there lived a tradition, and a private belief. Everything starts to make sense for us from the moment that we understand the history. … This book is a magnificent way for us to play capoeira (as Grand Master Sombra says) without legs, with our brain, our feelings, and with our soul. From there, our behavior will become closer to the capoeira spirit, and our movements will make sense.”
—Contra Mestre Paulo Roberto, Associação de Capoeira Senzala de Santos, Athens, Greece

“An essential insight into the evolution of Afro-Brazilian culture and history. Written with great clarity and scholarship, this second volume is a must for anyone touching the ground of capoeira. Definitely a book to take to the desert island.”
—Contra Mestre Ceará, Associação de Capoeira Canigó

"What marks out The Jogo de Angola from Luanda to Cyberspace is the exceptional thoroughness and breadth of the research, which reveals the complex history of capoeira by drawing from a vast array of sources and information from other fields ... [This] allows him to explain, challenge and set in context many of the myths and stereotypes about the history of capoeira.”
—Richard Chipping, tai chi ch’uan and self-defense instructor, London, England

Gerard Taylor has been practicing capoeira since the 1980s. In 1996 he received the “formado” grade and co-founded the Oslo Capoeira Klubb the same year. The author of three previous books on the subject, he lives in Norway.
Loading...
or
Not Currently Available for Direct Purchase