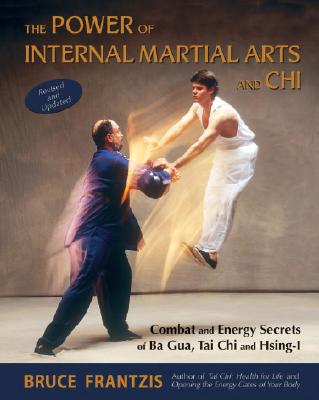 The Power of Internal Martial Arts and Chi

Originally published in 1998, this book has become a martial arts classic. It provides detailed descriptions of the three main internal martial arts—tai chi (taiji), hsing-i (xingyi) and ba gua (pakua)—and their sub-styles, as well as how they differ from each other and from such external arts as karate, tae kwon do and judo. Each internal martial art is analyzed in terms of its fighting strategies and applications. This revised edition includes 50 pages of additional material including a new chapter on martial arts and spirituality.This was the first book to provide in-depth information to Westerners about nei gung (neijiaquan), the sophisticated Taoist system developed in ancient China for working with chi in the body, mind and spirit. Chi helps build relaxed speed and power without the use of muscular tension or adrenaline surges. This gives many internal martial artists a powerful edge over counterparts trained in external martial arts.

The book provides vivid details about Frantzis’ personal training odyssey in the martial arts, including fascinating profiles of such renowned martial artists as Morehei Ueshiba, founder of Aikido; ba gua master Wang Shu Jin, who emanated chi so powerfully that on cold days his students could warm their hands by standing near him; and Liu Hung Chieh, the legendary master of the internal martial arts and Taoist meditation who also had a complete knowledge of traditional Chinese medical theory.

The new edition demystifies the technique known as fa jin, the storage and sudden discharge of energy without the use of muscular force, one aspect of which is demonstrated on the front cover. The new edition also adds a lengthy chapter on the spiritual development of a martial artist, and describes how the internal martial arts are linked to Taoist meditation.

Praise For The Power of Internal Martial Arts and Chi: Combat and Energy Secrets of Ba Gua, Tai Chi and Hsing-I…

"This work by Bruce Frantzis on the practical structures and essence of the internal systems is definitive. It will become a classic, and will serve as a catalyst for kindred spirits. A must for all serious students of the martial arts."
—Stan Israel, senior student of renowned tai chi master, Chen Man-ching.

"Bruce Frantzis is one of the few Westerners to comprehend the Taoist internal martial art system. For those seeking to understand energy principles in their own art, Frantzis has now opened The Way."
—Robert Nadeau, Aikido Sixth-Degree Black Belt, Director of City Aikido, San Francisco, CA

Chi master Bruce Frantzis is reputed to be the first Westerner to hold authentic lineages in tai chi, hsing-i and ba gua. He began his martial arts training in 1961 and studied healing, martial arts and meditation with renowned teachers in the United States and Asia—including training for three years in Japan and more than a decade in China.

Since 1987, Frantzis has taught tai chi, chi gung, hsing-i, ba gua, TAO yoga, TAO meditation, and energetic-healing therapies to over 15,000 students in the United States and Europe. His teaching methods are spread by a growing number of certified instructors that he has trained.

Frantzis is the author of several widely praised books about the power of chi including: Tai Chi: Health for Life; the chi gung books, Opening the Energy Gates of Your Body and the Dragon and Tiger Medical Chi Gung Instruction Manual; and two volumes on the water method of TAO meditation, Relaxing Into Your Being and The Great Stillness. Two CDs, The Tao of Letting Go and Ancient Songs of the Tao, shed valuable insights into the power of TAO Meditation in helping people let go of their deepest emotional blockages and move closer to becoming truly alive, balanced and joyful.

“Bruce Frantzis is a true Taoist Master.” —Michael E. Gerber, author of The E-Myth Revisited
Loading...
or
Not Currently Available for Direct Purchase