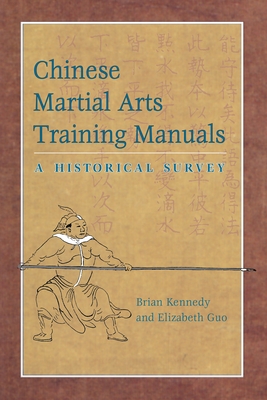 Secret training manuals, magic swords, and flying kung fu masters—these are staples of Chinese martial arts movies and novels, but only secret manuals have a basis in reality. Chinese martial arts masters of the past did indeed write such works, along with manuals for the general public. This collection introduces Western readers to the rich and diverse tradition of these influential texts, rarely available to the English-speaking reader.

Authors Brian Kennedy and Elizabeth Guo, who coauthor a regular column for Classical Fighting Arts magazine, showcase illustrated manuals from the Ming Dynasty, the Qing Dynasty, and the Republican period. Aimed at fans, students, and practitioners, the book explains the principles, techniques, and forms of each system while also placing them in the wider cultural context of Chinese martial arts. Individual chapters cover the history of the manuals, Taiwanese martial arts, the lives and livelihoods of the masters, the Imperial military exams, the significance of the Shaolin Temple, and more. Featuring a wealth of rare photographs of great masters as well as original drawings depicting the intended forms of each discipline, this book offers a multifaceted portrait of Chinese martial arts and their place in Chinese culture.

"This book provides considerable information on Chinese martial arts history, particularly of the Republican era, its personages, and manuals not previously available in English. It also covers topics, including those related to Shaolin Monastery and Taoism, in a down to earth, common sense manner.... Overall, Chinese Martial Arts Training Manuals successfully achieves the author’s purpose, expressed in the epilogue: '[To serve] as an informative and interesting introduction to this rich facet of Chinese martial art culture.'"—Stanley E. Henning, China Review International

Brian L. Kennedy, an attorney, has practiced Chinese martial arts since 1976 and has recently begun studying Brazilian Jiu-Jitsu. His previous books, which appeared in Chinese, include Witness Examination Skills, the official reference for Taiwan’s prosecutors and trial judges, and Legal Ethics.

Elizabeth Nai-Jia Guo is a professional translator living in Taiwan. She is a practitioner of qi gong and hatha yoga. She has translated a wide range of books into Chinese including titles on church architecture, the history of science, and criminal law. Guo and Kennedy co-author a regular column for Classical Fighting Arts magazine.
Loading...
or
Not Currently Available for Direct Purchase