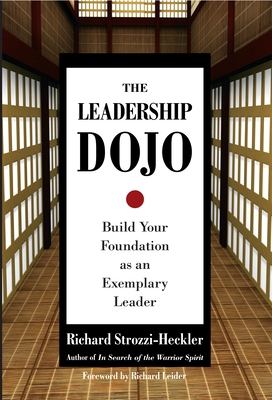 Build Your Foundation as an Exemplary Leader

History is filled with accounts of great leaders, but how did they become so? Written for emergent leaders in any endeavor, this new work from renowned consultant Richard Strozzi-Heckler offers a new approach to leadership. The first book of its kind to base business and management strength on integral body awareness, the book presents key principles such as shugyo, or self-cultivation, as crucial in developing the individual responsibility, social commitment, and moral and spiritual vision required to lead with authority and efficacy. The Leadership Dojo is based on three questions: What does a leader do? What are the character values most essential to exemplary leadership? How do you teach these values? Drawing on the wisdom of ages from Plato to the Bhagavad-Gita, from Thucydides to the Abidharma, the book asserts that understanding and answering these questions holds the key to superior leadership skills. Strozzi-Heckler teaches with real-world examples based on his wide experience training decision-makers at companies like AT&T and Microsoft. The book’s multifaceted approach helps readers establish a powerful Leadership Presence, a platform from which they can take ethical action with compassion and pragmatic wisdom.

Richard Strozzi-Heckler, PhD is the author of the nationally acclaimed In Search of the Warrior Spirit, which chronicles his training of the Green Berets and his vision of reclaiming traditional warrior virtues in a technologically-oriented society. He also authored The Anatomy of Change, Holding the Center: A Sanctuary in Times of Confusion, and The Mind/Body Interface. Having worked with tens of thousands of people over the last 30 years including corporate executives, Olympic and professional athletes, managers, political leaders, and inner-city gangs, Strozzi-Heckler’s client list includes U.S. Marines, U.S. Army Green Berets, U.S. Navy SEALS, AT&T, DMV, Microsoft, Sportsmind, Capital One, Barnes & Noble, and Hewlett-Packard.

Praise For The Leadership Dojo: Build Your Foundation as an Exemplary Leader…

"Strozzi-Heckler, a martial arts expert, former marine, and executive coach for AT&T and Microsoft, provides a decidedly mystical primer on leadership. Effective managers, he says, must cultivate their inner "warrior spirit"—becoming, à la George Washington in the Revolutionary War, the physical embodiment of their organizations. Unorthodox, sure, but it worked against the British."
—U.S. News & World Report, New and forthcoming books for the executive's nightstand

"In The Leadership Dojo, Richard Strozzi-Heckler draws on his vast coaching experience and encyclopedic knowledge of somatics to pinpoint the true source of leadership: the commitments we hold; the values underlying them; and our presence in the world--through body, language, and action--as we pursue those commitments. The Leadership Dojo describes concrete, straightforward practices that nurture extraordinary leadership by deepening our awareness of the commitments we represent, the purposes we embrace, and how we carry ourselves as physical beings. The result is a pragmatic, powerful, and promising approach, worthy of study by anyone seeking to educate, train, or develop leaders to do well and do good at the same time."
—James N. Baron, William S. Beinecke Professor of Management, Yale School of Management

"The teams that I led using this training met goals on time and under budget. Team members became effective leaders who went on to bigger roles and responsibilities. I would not dream of leading a team without relying on the teachings of Richard Strozzi-Heckler. It would be like skiing without the snow."
—Nancy J. Hutson, Senior Vice President, Pfizer Research & Development

"In this day and age, the question confronting all sectors is how to develop exemplary leaders who embody their message. The Leadership Dojo goes far beyond the traditional concept of leadership development, illuminating fresh practices to guide this quest. A must-read for leaders and leadership development professionals alike."
—Richard J. Leider, Founder, The Inventure Group, bestselling author of Repacking Your Bags and The Power of Purpose

"The Leadership Dojo: Build Your Future Foundation as an Exemplary Leader by Richard Strozz-Heckler bases business and management strength on integral body awareness."
—Publishers Weekly
or support indie stores by buying on
(This book is on backorder)
Copyright © 2020 American Booksellers Association