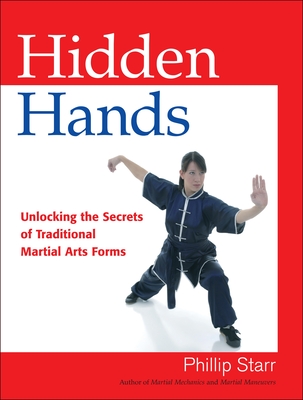 The solo forms or sets of a martial art may appear to be merely flashy performances or rote exercises for conditioning, and because of this many students disregard this aspect of their training. True martial arts masters, however, know that the forms of a system actually contain all of the techniques and secrets of that system—if one knows how to look for them. Often called the “great books” of martial arts, forms are crucial for a deeper understanding of the art one practices.

In Hidden Hands, Phillip Starr provides detailed instruction in the art of reading martial arts forms: by first mastering rudimentary “words” (individual techniques) and then moving on to simple “sentences” (combinations of techniques), the student will come to understand forms as ancient documents that contain the true essence of their art. Starr discusses different aspects of forms practice such as rhythm, timing, spirit, and performance, and presents specific guidelines for interpreting the movements of various forms. The book ends with the dissection and interpretation of a complete form. Containing examples from Chinese, Japanese, Okinawan, and Korean martial arts, Hidden Hands shows serious practitioners how to improve in any art and style.

“Phillip Starr's newest book, Hidden Hands, is one of a kind. Mr. Starr shows that the functions and practical applications of kata are universal and can apply to any kind of martial art. He brings forth examples of these applications not only from kung fu but from karate and taekwondo as well. This book is a must for any serious martial artist.
—Prof. Dan Anderson, author of American Freestyle Karate: A Guide to Sparring

Phillip Starr has been teaching martial arts professionally since 1971. He was named a U.S. National Champion by the United States Karate Association and has received the Presidential Leadership Award from the Amateur Athletic Union. The founder of the kung fu style known as Yiliquan and the author of three other martial arts titles, he lives in Council Bluffs, IA.
Loading...
or
Not Currently Available for Direct Purchase