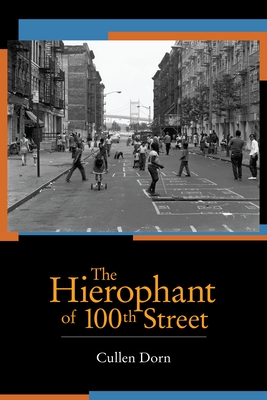 The Hierophant of 100th Street (Paperback)

The Hierophant of 100th Street is a remarkable, unusual book: a metaphysical novel set in a violent world of slums, gangs, and prisons. Drawing on the author's experience of growing up in the infamous East Harlem neighborhood of 100th Street in the 1960s, the story follows 17-year-old Adam Kadman and his 9-year-old brother John through their respective initiations into the realities of street life while simultaneously introducing real-life characters who dwell in the life of the spirit.

Veiled in the guise of fiction, most of what appears in the book is actually a truthful account of the author's real-life experience. Like the author, the young Adam also ventures out from the slums of New York to discover the meaning of life amid the horrors of existence, and finds romance, mysticism, and purpose.

Seeking to extricate himself from 100th Street, Adam is drafted into the army and later travels to Egypt, where in a harsh world of theocrats and misogynists he falls in love with a young Arab woman. Out of his element, he attacks the social structure—and ends up running for his life. He returns back to the old neighborhood only to find it changed … destroyed by an invasion of drugs, betrayal, and murder.

By chance he encounters a mysterious man, Clifford Bias (a renowned twentieth-century clairvoyant), and is taken under the wing of the "magus." Discovering his own psychic abilities, Adam enters his mentor's secret society and a world of mysticism and love. Tapping the same rich spiritual vein as The Da Vinci Code and The Celestine Prophecy and written in the stark language of the streets, this daring, cinematic novel explores the ancient truths and metaphysical mysteries hidden in the fabric of everyday life.

Cullen Dorn was born in New York City in 1947 and raised in East Harlem, barely making it through high school. Homeless on three separate occasions, he has served in the Army, been a mailman and taxi driver in New York, a bartender in Miami, and is currently an airline grounds operator in Orlando and resides in Kissimmee, Florida.

Praise For The Hierophant of 100th Street…

“Populated by souls in bodies amid bodies seeking souls, The Hierophant of 100th Street blends the grandeur and cosmic tragedy of West Side Story with the spiritual wisdom of A Course in Miracles. Dorn’s landscape is as bleak as drug-ravaged Spanish Harlem, clitoridectomy in Egypt, and the bowels of the American penal system and, at the same time, as transcendent as Afro-Reggae and the channelings of Edgar Cayce. This is a novel in which characters are truly born again and again and again. . . . It moved me to tears.”
—Richard Grossinger, author of Planet Medicine and The Bardo of Waking Life

“This book is special. An unusual and passionate novel, moving and fun to read, The Hierophant of 100th Street is a mixture of esoteric wisdom and Hugh Selby’s Last Exit to Brooklyn. A large novel in scope, it somehow manages to include both hell and heaven. Dorn really is an untutored genius.”
—Gerald Rosen, author of The Carmen Miranda Memorial Flagpole and Growing Up Bronx

“While Dorn does connect the spiritual aspect of the story to the larger picture of 100th Street, it is these characters that brought the book to life for me…The Hierophant of 100th Street shows that life may not be all that it seems and that even in the darkest of situations, there is promise, if not in the here and now, then somewhere else.”
—Diary of an Eccentric
or
Not Currently Available for Direct Purchase
Copyright © 2020 American Booksellers Association