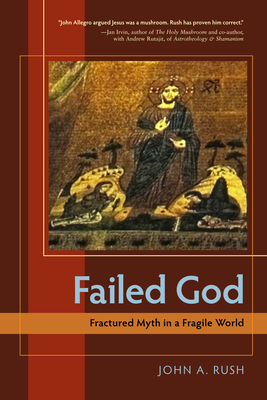 Fractured Myth in a Fragile World

On a 2001 trip to the cathedrals of Europe, anthropologist John Rush and his wife entered St. Mark’s Basilica in Venice and encountered a mosaic depicting Jesus surrounded by mushrooms with an Amanita muscaria cap in his hand. Examining the space with new eyes, they discovered images of mushrooms and mind-altering plants all over the Basilica. Intrigued, Dr. Rush spent seven years researching and reflecting on the profound effects hallucinogens had on the founding of all three major Western religions. He concluded that Judaism, Christianity, and Islam are political constructions evolving out of the use of not only Amanita muscaria, but a plethora of mind-altering substances.Failed God: Fractured Myth in a Fragile World re-examines the scriptural stories of Judaism, Christianity, and Islam as told in the Bible and Qur’an and reveals them as “concocted mythical charters stemming from drug-induced romps with the super-natural.” Rush shows how mind-altering substances played an instrumental role in the birth and development of Western religions and explains how they contributed to reports of “prophetic” experiences, including angry and disturbing messages from the divine. With chapters on Judaism, Christianity, and Islam, Rush fully addresses the effects of mind-altering substances on each tradition, convincingly discrediting the idea that they stem from actual human interaction with the divine. He also shows how an intoxicated and over-zealous Apostle Paul corrupted Jesus’s simple message of human decency, forming an oppressive religious system based on fear. In a thought-provoking conclusion, Rush asks how we can continue to attribute authority to traditions that were so clearly irrationally founded and incompatible with today’s world.

Praise For Failed God: Fractured Myth in a Fragile World…

“John Allegro argued Jesus was a mushroom. Rush has proven him correct.”
—Jan Irvin, author of The Holy Mushroom and co-author, with Andrew Rutajit, of Astrotheology & Shamanism

“The scholarship is impeccable.”
—CirclesOfLight.com

John A. Rush, PhD, ND, is a Professor of Anthropology at Sierra College, Rocklin, California who teaches courses in Physical Anthropology and Magic, Witchcraft and Religion. Dr. Rush’s publications include Clinical Anthropology: An Application of Anthropological Concepts within Clinical Settings (1996), Stress and Emotional Health: Applications of Clinical Anthropology (1999), Spiritual Tattoo: A Cultural History of Tattooing, Piercing, Scarification, Branding, and Implants (2005), and The Twelve Gates: A Spiritual Passage through the Egyptian Books of the Dead (2007). He is also a Naturopathic Doctor and Medical Hypnotherapist in private practice.
Loading...
or
Not Currently Available for Direct Purchase