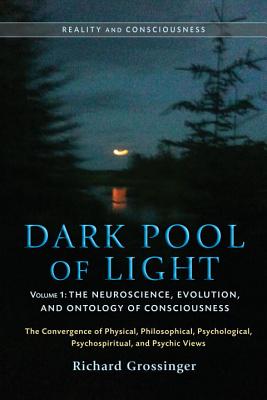 In books like Embryogenesis and Embryos, Galaxies, and Sentient Beings, author Richard Grossinger brought together the subjects of biological embryology and the esoteric process of human consciousness becoming embodied ("The embryo is the universe writing itself on its own body"). In Dark Pool of Light, his latest creation, Grossinger weaves neuroscience-based behaviorism and the phenomenology of "being" and reality together with psychological and psychospiritual views of "that single thing which is most difficult to understand or vindicate: our own existence."

In 2008 Grossinger began studying with noted psychic teacher John Friedlander, who helped him refine his vision of cerebral and somatic awareness to still-subtler levels. "Dark Pool of Light began unnamed in the journals of my psychic work with John Friedlander," says Grossinger, "not so much a record of actual practices as insights from them and extensions out of them." An expansive inquiry into the nature of consciousness, the series examines the tension between the scientific and philosophical, and psychic views of the same phenomena, and includes "field notes" and experiential exercises that invite the reader to make their own explorations.

Dark Pool of Light is divided into three volumes, which the author calls "movements"; the allusion to music is apt, for the book unfolds in a truly symphonic manner. In Volume 1, Grossinger begins with the scientific and philosophical, analytical views of reality, exploring the science, parascience, philosophy, and psychology of consciousness. Covering topics as diverse as current discoveries in neuroscience and the philosophy of the ancient Greeks, the book gives a broad overview of the bodies of knowledge concerning the nature of reality and consciousness.

Since the issuing of Solar Journal: Oecological Sections by Black Sparrow Press in 1970, Richard Grossinger (richardgrossinger.com) has published some 35 books, most of them with his own press, North Atlantic Books, but also titles with Harper, Doubleday, Sierra Club Books, and J. P. Tarcher, among others. These have ranged from long explorations of science, culture, and spirituality (The Night Sky, Planet Medicine, Embryogenesis) to memoirs and nonfiction novels (New Moon, Out of Babylon) to experimental prose (Book of the Earth and Sky, Spaces Wild and Tame) and science fiction (Mars: A Science Fiction Vision). Grossinger received a PhD in anthropology from the University of Michigan in 1975 and lives with his wife Lindy Hough in Berkeley, California.

Praise For Dark Pool of Light, Volume One: The Neuroscience, Evolution, and Ontology of Consciousness (Reality and Consciousness #1)…

"I hesitate to call this trilogy a book, or even three books. I mean, what is it? A double treatise on the limitations of scientific materialism and the renunciatory logic of Buddhism? A celebration of the possibilities of a shameless, liberated, lid-off theosophical imagination? A spiritual autobiography? An ethnographic report on some “psychic studies” in Berkeley? The answer, of course, is that it is all of these things, and more."
—Jeffrey J. Kripal, author of Encountering Kali: In the Margins, at the Center, in the West and editor of Hidden Intercourse: Essays on Eros and Sexuality in the History of Western Esotericism

“What I want is simple. I want some hint, some dream, some will o’ the wisp that seems to connect matter and mind in a way that I can run with. With my training in quantum physics, I reject all glib and easy analogies. I want something hard—the quantum philosopher's stone. Grossinger’s material takes the mind down strange corridors it would never have discovered for itself. And the most important thing his writings do is to wake us up to the mystery that we are every moment living.…"
—Nick Herbert, author of Elemental Mind: Human Consciousness and the New Physics

"Grossinger has a great synthetic mind and is a master of poetic prose and imaginative, free-ranging scholarship."
—Michael J. Harner, author of The Way of the Shaman

"Richard Grossinger is one of the most original spiritual writers of our time."
—Andrew Harvey, author of Heart Yoga and The Hope

"I think what Grossinger has written here is historic and momentous and game-changing. He has used science, turned it on its head, and aimed his sights on materialism, atheism, and even dualism. Reading this mind- and gut-wrenching book has left me with but one conclusion: the author is a goddamn … genius. I cannot even begin to fathom how he set about writing this.” —Joshua Laudermilk, philosopher
or
Not Currently Available for Direct Purchase
Copyright © 2020 American Booksellers Association