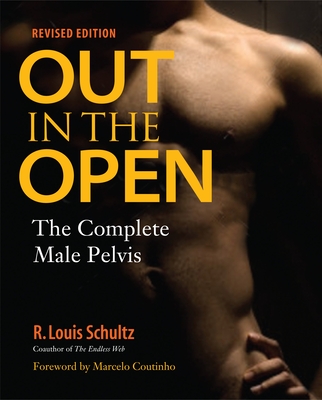 Out in the Open, Revised Edition (Paperback)

Out in the Open, Revised Edition: The Complete Male Pelvis offers a frank exploration of the male pelvic region from a cultural and scientific perspective. Focusing on pelvic structure and development, the book explains how male sexuality develops throughout a man's life—from birth onwards. An experienced Rolfer with an academic background in physiology, the late author R. Louis Schultz, PhD, offers the fruits of his wisdom gleaned over the course of his twenty-five year bodywork career.

Enhanced with over 120 detailed photos and illustrations, the book offers valuable advice for bodyworkers working in the pelvic region, a possible area of tension and more serious pelvic conditions. Revised by Schultz's protégé, Advanced Rolfer Marcelo Coutinho, this edition includes a redesigned cover, a new foreword by Coutinho, and an added appendix of 20 exercises and self-treatments for common pelvic dysfunctions.

An Advanced Certified Rolfer and Rolfing Movement teacher, the late R. Louis Schultz, PhD, founded the anatomy program at the Rolf Institute and presented Rolfing workshops in the U.S., Germany, Italy, England, Brazil, and Australia. A former professor and chairman of the Department of Human Biology at the University of Colorado School of Medicine and Dentistry, he was the author of over forty scientific publications and the coauthor of The Endless Web: Fascial Anatomy and Physical Reality.

Praise For Out in the Open, Revised Edition: The Complete Male Pelvis…

"The success of this book lies in the fact that it has contributed immensely to the chipping away of negative cultural attitudes regarding the pelvis. It has helped many men come to terms with their genitals, thereby allowing them to gain confidence and achieve greater sexual enjoyment.... In my own practice, it has laid the groundwork for treating clients who have exhausted all other options in the treatment of conditions such as impotence, premature ejaculation, fertility problems, hemorrhoids, hernias, and other pelvic dysfunctions."
—From the foreword by Marcelo Coutinho, Advanced Rolfer and protégé of R. Louis Schultz

“R. Louis Schultz’s Out in the Open, Revised Edition, with new exercise material by Schultz’s protégé, Marcelo Coutinho, is a necessary book—designed for all practitioners who aspire to be complete in their approach to the body. This book is practical, fearless, funny, tender, and ever-so human … it brings male pelvic issues out into the light of day.”
—Thomas Myers, director of Kinesis, Inc. and author of Anatomy Trains and Fascial Release for Structural Balance

“Influenced by Wilhelm Reich, Dr. Ida P. Rolf, and Joseph Pilates, R. Louis Schultz—with his extensive background in anatomy and physiology—explores the tensions and resultant implications of how men sense their pelvis within the larger context of their bodies. His pioneering work is an investigative exploration into avenues of change and resolution.”
—Neal Powers, teacher of the Rolf Method of Structural Integration at the
Guild for Structural Integration

“With this book, R. Louis Schultz shares the revelations of his profound and detailed study of a body area central to the human structure yet shrouded in cultural taboos and preconceptions. Schultz approaches the pelvis from many perspectives, which makes his contribution a unique resource for those whose work is guided by a holistic paradigm.”
—Pedro Prado, PhD, somatic psychologist and chairman of the advanced faculty of
the Rolf Institute of Structural Integration
or
Not Currently Available for Direct Purchase
Copyright © 2020 American Booksellers Association