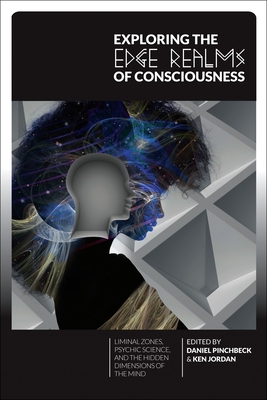 Exploring the Edge Realms of Consciousness

Liminal Zones, Psychic Science, and the Hidden Dimensions of the Mind

A diverse group of authors journey into the fringes of human consciousness, tackling psychic and paranormal phenomena, lucid dreaming, synchronistic encounters, and more. Collected from the online magazine Reality Sandwich, these essays explore regions of the mind often traversed by shamans, mystics, and visionary artists; adjacent and contiguous to our normal waking state, these realms may be encountered in dreams or out-of-body experiences, accessed through meditation or plant medicines, and marked by psychic phenomena and uncanny synchronicities. From demons encountered in sleep paralysis visions to psychic research conducted by the CIA, the seemingly disparate topics covered here congeal to form a larger picture of what these extraordinary states of consciousness might have to tell us about the nature of reality itself.

Praise For Exploring the Edge Realms of Consciousness: Liminal Zones, Psychic Science, and the Hidden Dimensions of the Mind…

"[A] compilation of writing from notable thinkers like remote viewer Russel Targ, lucid dreamer Paul levy, synchromystic magician Tony Vigorito, virtual realist Diana Reed Slattery, and many distinguished others delving into countless intriguing topics, all having in common the evolution of human consciousness into and beyond its own apparent limits." —Zack Kopp, Examiner.com

"[A]n absorbing and fascinating read... collected, edited, and introduced by Daniel Pinchbeck; this book is a Renaissance of compelling writers delving into some of the most intriguing topics... Whether it’s Alberto Villoldo’s shamanic perspectives of mankind’s evolution into 'Homo Luminious' or Russel Targ’s article about the CIA experiments into psychic research, the book is hard to put down, however, the best thing about this is that it can be read at your own pace, with each chapter being a unique perspective. One must give this stellar collection of authors credit for their excellent writing style and compelling insights." —Dreamspeaker

"Readers will find something of more than passing interest in the just-released nonfiction anthology...the table of contents reads like a who's-who of fascinating figures." —TeemingBrain.com

"[A] book that radically confirms the evident fact that the established world view is splitting and fracturing...an uplifting examination of the true potential of the human spirit to travel into unseen territory..."
—Peter Morris of LightoftheLogos.com & MysteriesofSirius.com

Daniel Pinchbeck is the editorial director of Reality Sandwich and cofounder of Evolver.net. He is the author of Breaking Open the Head: A Psychedelic Journey into the Heart of Contemporary Shamanism, among other works.

Ken Jordan is the publisher and executive producer of Reality Sandwich and Evolver.net and has written for Wired, Index, and The Paris Review. Pinchbeck and Jordan have coedited two other anthologies, Toward 2012 and What Comes After Money? Both live in New York City.
Loading...
or
Not Currently Available for Direct Purchase