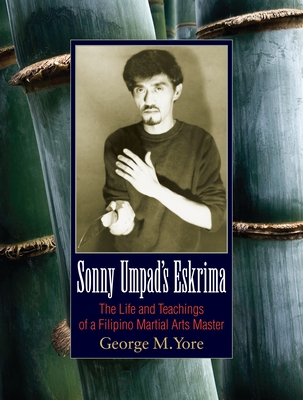 The Life and Teachings of a Filipino Martial Arts Master

Sonny Umpad's Eskrima provides insight on Maestro Santiago “Sonny” Umpad's life, philosophy, and teaching methods, as well as the structural underpinnings of his system. Born with the soul of a warrior, the intellect of a scholar, and a zealot's devotion to his art, Maestro Santiago "Sonny" Umpad forged an enduring contribution to the rich and colorful history of Filipino martial culture. In 1976, after immigrating to the United States, Sonny founded the school of Visayan Style Corto Kadena & Larga Mano Eskrima—rooted in his training in the Philippines and tested by a hard and dangerous life on the streets, Sonny's system was above all else practical. As Sonny's reputation as a talented fighter became well-known, he began to cross-train with masters of other martial arts, including Jesse Glover (Bruce Lee's first student) and Wally Jay (founder of Small Circle Jujitsu). One of the most innovative and visionary exponents of the Filipino arts, Sonny pioneered the concept of "mixed martial arts" long before the term was in use.

Instructor George Yore has assembled the writings of six of Sonny's students (including Wade Williams, 2012 nominee for the U.S. Martial Arts Hall of Fame) to create a biographic homage to this remarkable martial artist; basic techniques and applications are also demonstrated, accompanied by 130 step-by-step photos. Practitioners of Filipino martial arts—as well as mixed martial artists and security specialists—will find valuable instruction in techniques and applications, while the thousands of people touched by Sonny's teachings will gain a new understanding of this notoriously reclusive master's life—and how his experiences informed the development of his system.

George M. Yore has studied martial arts for over forty years and holds instructor ranks in both Kenpo karate and Visayan Style Corto Kadena & Larga Mano Eskrima. He trained in the system of Visayan Eskrima under its founder, Maestro Santiago "Sonny" Umpad, and received official Guro status directly from him. An exercise physiologist by profession, Yore lives in Oakland, California.
Loading...
or support indie stores by buying on