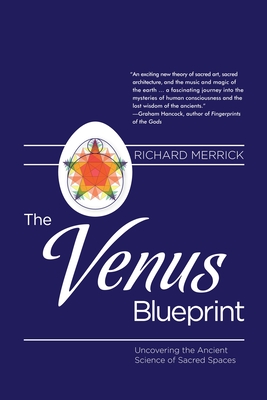 In 2010, Richard Merrick took a family trip to Scotland's Rosslyn chapel—the enigmatic fifteenth-century temple made famous by Dan Brown's The Da Vinci Code. Little did he know he was about to embark upon an intellectual and personal journey that would lead to the discovery of a real-life lost symbol—one that reveals the connection between the world's most sacred temples and opens up a treasure trove of lost science and ancient secrets.

The symbol he discovers—the Venus Blueprint—is based on that planet's orbital pattern, which takes the shape of a five-pointed star when seen from Earth. As Merrick digs deeper, he realizes the Venus Blueprint was an integral part of the design template of some of the most significant religious architecture around the world--including St. Peter's Basilica in the Vatican, the Roman Pantheon, the Greek Parthenon, the Temple of Jerusalem, and the Great Pyramid of Giza, as well as many buildings designed by the secretive Freemason society.

Upon further examination, Merrick is astounded to discover that temples designed using the Venus Blueprint are endowed with extraordinary acoustics that, when supplied with the right tones and frequencies, are capable of harmonizing with Earth's resonant frequencies and evoking altered states of consciousness. He then proposes a fascinating idea: Could it be that the ancients used these harmonics to enhance entheogenically induced visions—to commune with the divine and liberate the gods within?

Supported by an impressive array of historical research and scientific analysis, The Venus Blueprint offers compelling evidence of an ancient lost culture that was both spiritually and scientifically advanced.

Richard Merrick is an award-winning pioneer in the high-tech industry, developing sound- and language-recognition systems, graphics and animation engines, and AI game engines designed to mirror and mimic human behavior. He retired in 2006 to further develop his theory of music perception, called harmonic interference theory. In addition to writing several books on topics related to harmonics, he has written for Nexus and Caduceus magazines and has spoken as a guest lecturer at Rosslyn chapel in Scotland.

Praise For The Venus Blueprint: Uncovering the Ancient Science of Sacred Spaces…

"An exciting new theory of sacred art, sacred architecture, and the music and magic of the earth ... a fascinating journey into the mysteries of human consciousness and the lost wisdom of the ancients."
--Graham Hancock, author of Fingerprints of the Gods

"A stunning reassessment of mankind's religious and scientific legacy ... a beautiful vision of a world once guided by the physics of resonance, the symbolism of geometry, and the music of the spheres."
--Nassim Haramein, The Resonance Project Foundation

"... a convincing case for a profound cosmic connection between Venus's orbital geometry and the architectural template underlying Rosslyn chapel and most other significant ancient temples ... a compelling detective story!"
--Simon Best, editor of Caduceus magazine

"Original and thought-provoking, The Venus Blueprint challenges entrenched dogmas of both science and religion.... Merrick just may have succeeded in constructing the long sought-after mythology spoken of by Joseph Campbell."
--Scott Olsen, author of The Golden Section and Divine Proportion