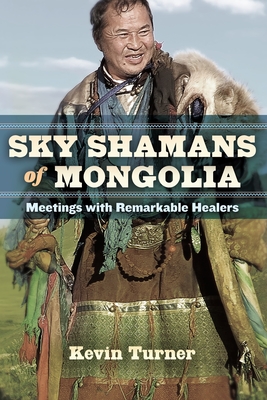 Part travelogue, part experiential spiritual memoir, Kevin Turner takes us to visit with authentic shamans in the steppes and urban centers of modern-day Mongolia. Along the way, the author, a practicing shaman himself, tells of spontaneous medical diagnoses, all-night shamanic ceremonies, and miraculous healings, all welling from a rich culture in which divination, soul-retrieval, and spirit depossession are a part of everyday life.

Shamanism, described in the 1950s by Mircea Eliade as "archaic techniques of ecstasy," is alive and well in Mongolia as a means of accessing "nonordinary realities" and the spirit world. After centuries of suppression by Buddhist and then Communist political powers, it is exploding in popularity in Mongolia. Turner gives compelling accounts of healings and rituals he witnesses among Darkhad, Buryat, and Khalkh shamans, and goes on to provide us with his insights into a universal shamanism, principles that lie at the heart of shamanic traditions worldwide. This astounding, inspiring book will appeal to shamans and shamanic therapists, students of Mongolian culture and comparative religion, and fans of off-grid travel memoirs.

Praise For Sky Shamans of Mongolia: Meetings with Remarkable Healers…

“Sky Shamans of Mongolia is a fascinating and serious work that is an important contribution to shamanic knowledge. A must–read for anyone wishing to learn about Mongolian shamanism and to understand its place in the world.”—Michael Harner, PhD, author of The Way of the Shaman and Cave and Cosmos: Shamanic Encounters with Another Reality

“As one who has worked and taught alongside Mongolian shamans, I find this book by Kevin Turner has illuminated much about this stunningly powerful and mysterious form of shamanism. He shares what he has learned firsthand, and he frames it in a rich context of multiple dimensions of shamanism, including neuroscience, and rolls it into a vision of shamanism as personal evolution with a vision of the future. Read this book!”—C. Michael Smith, PhD, clinical psychologist and author of Jung and Shamanism in Dialogue and Psychotherapy and the Sacred

“Kevin Turner’s marvelous fieldwork describes shamanism and shamanic knowledge as it really is in Mongolia.”—L. Chuluunbaatar, PhD, professor of linguistics at National University of Mongolia

“Kevin Turner’s Sky Shamans of Mongolia covers a subject few authors have investigated in depth. In this wonderful and well-written text, Turner explores shamanism in the kind of detail only an initiate could communicate.  Not only does Turner speak to the cultural role of shamans, but he reveals the experiential cosmos in which they journey for the benefit of community.  I recommend this book for anyone interested in Asian shamanism.”—Larry Peters, PhD, author of Tibetan Shamanism: Ecstasy and Healing

“Turner’s unique qualifications make this book an immensely valuable resource for Westerners interested in Mongolian shamanism, or shamanism wherever practiced. An American living in Asia, speaking several Asian tongues, himself a shamanic practitioner, Turner possesses not only the gift of understanding but the gift of putting that understanding into clear, readable language. Unlike academics attempting to describe shamanism from the outside, Turner knows it from the inside, and the same familiarity that gained him the confidence of the shamans enables him to be a sure-footed interpreter for the reader.”—Frank DeMarco, author of The Sphere and the Hologram

“A fascinating and compelling account of contemporary shamanic practice, based on firsthand experience and simultaneously an exercise in religious anthropology and cultural ethnography, this work explores a sacred tradition whose deep impact on the West is gradually being rediscovered and interpreted anew.”—Paul Bishop, PhD, author of The Archaic: The Past in the Present

“Kevin Turner is an explorer of the inner worlds, a researcher of the deep meaning of life. His book, in addition to being an anthropological text, is also a travel story, full of surprises, between blue skies and green landscapes without boundaries, the songs and costumes of the shamans, their miraculous healings and visions, and the sterile discussions among academic scholars described with fine irony. [A] trip to real but extraordinary experiences.”—Guido Ferrari, journalist and director of Tao: The Watercourse Way at Wu Yi Mountain

“Sky Shamans of Mongolia is an invaluable guide for anyone interested in understanding one of the world’s oldest shamanic traditions with an abundance of detail to satisfy a curious reader or a serious student of global shamanism.”—Robert Thé, medical anthropologist

“Kevin Turner brings a rare combination of skills and tools to the table, which in Mongolia opened doors and hearts normally closed to Western researchers of shamanism. He is a linguist, a teacher, and a practicing shaman. As a Western shaman, he had to endure much skeptical probing before being accepted by the Mongolian shamanic community and invited to their gatherings and healing ceremonies. Writing Sky Shamans of Mongolia from the perspective of a shamanic practitioner himself, Kevin Turner offers his readers a rare in-depth overview of the history and current practices of Mongolian shamanism, which after a period of persecution and decline is experiencing a revival of astonishing proportions.”—Sabine Lucas, PhD, Jungian analyst, and author of Past Life Dreamwork

“Sky Shamans of Mongolia provides authoritative and extensive coverage of a little-known tradition. The writer’s personal encounters enliven the account, furthered by his position as a practitioner of ‘universal shamanism’ which enables him to enjoy privileged access. There are moments when the reader is so drawn in by the firsthand descriptions that it feels as if one were actually there.”—John Dougill, author of Shinto Shrines: A Guide to the Sacred Sites of Japan’s Ancient Religion

“The dramatic resurgence of shamanism in Mongolia, as detailed in this beautifully written study, is testament to the indomitable nature of the soul’s healing powers. Kevin Turner gives us both a window into shamanism as a worldwide phenomenon and a detailed account of ancestral Mongolian shamanic practices. Most interesting of all, Sky Shamans is that rare glimpse into the shamanic psyche, transmitted through these accounts.”—Jeremiah Abrams, author of Meeting the Shadow: The Hidden Power of the Dark Side of Human Nature

“An enjoyably written introduction to Mongolian and Inner Asian shamanisms that is based in experience and filled with knowledge. Recommended.”—Jeremy Narby, author of Shamans through Time and The Cosmic Serpent

“Author Kevin Turner has brought something of great importance to those seeking to understand and practice shamanism: a valuable contribution to the understanding and practice of shamanism in the West and a richly rewarding, fascinating study of Mongolian shamanism. The author’s adventures in the land of the shamans brings much food for thought and great insight.”—Nicholas Breeze Wood, editor of Sacred Hoop magazine

Kevin B. Turner is the director for Asia and faculty member of the Foundation for Shamanic Studies founded by Michael Harner. After years of study with yogis, monks, and lamas in India, Nepal, Southeast Asia, Taiwan, and Japan, Kevin met Michael Harner in 1997 and trained in core shamanism, an integrative, nontraditional approach to shamanism. He teaches Core Shamanism internationally, offering several workshops a year. Turner is also a full trainer at the Monroe Institute, which offers programs and training in the out-of-body experience, clairvoyance, remote viewing, psychokinesis, and psychopomp work.
Loading...
or
Not Currently Available for Direct Purchase