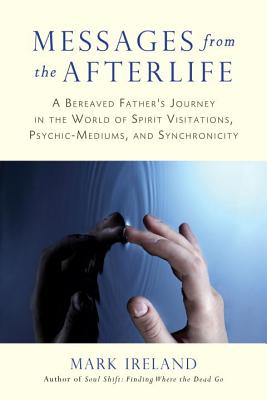 Messages from the Afterlife (Paperback)

A Bereaved Father's Journey in the World of Spirit Visitations, Psychic-Mediums, and Synchronicity

A father watches his teenage son step out the door on a hiking trip, not knowing that this is the last time he would see him.... A journal of grief, despair, and ultimately, hope, this book tells the story of every parent's nightmare--the sudden death of a child--and a father's search for meaning in a seemingly random world of psychics and skeptics. Expanding on territory covered in his 2008 memoir of his son's death Soul Shift, Messages from the Afterlife is both an account of Ireland's journey from indifference to belief and an overview of the resources available to the bereaved to help them receive messages from the afterlife.

Mark Ireland, son of celebrated "psychic to the stars" Dr. Richard Ireland, was a successful marketing executive in Arizona with little interest in his father's colorful history. While his father held readings for Mae West and traveled the U.S. demonstrating his parapsychological powers, Mark Ireland took a more conventional route through life. But when his own teenage son Brandon suddenly dies while hiking in the mountains with friends, Ireland is forced to confront his resistance to all things spiritual and begins to explore the possibility that communication with the dead is real.

In his search for conclusive evidence of life after death, he plunges into his father's world and meets an array of respected psychic-mediums who deliver unexpected messages not only from his son in the afterlife but also from many other souls seeking to communicate with the living. Fighting to retain a sense of critical thinking, Ireland also contacts scientists conducting research into the survival of consciousness after death. The book features detailed accounts of tests and experiments that various people have conducted to obtain proof of consciousness survival, including Ireland's own, involving a secret message left behind by his sister, Robin, who died of pancreatic cancer. The contents of this message were unknown to any living person and remained sealed in an envelope--untouched--until responses had been received from a group of qualified mediums who sought to "crack" the code. Messages from the Afterlife shows how spirit communication can be both undeniably accurate and frustratingly ambiguous, and above all demonstrates the value of having an open, receptive mind while maintaining faith in the indestructiblity of the human spirit.

Praise For Messages from the Afterlife: A Bereaved Father's Journey in the World of Spirit Visitations, Psychic-Mediums, and Synchronicity…

“In Messages From the Afterlife, Mark Ireland raises fundamental questions about the nature and fate of human consciousness. This touching, heartfelt account takes its place in the enlarging body of evidence suggesting that death is not final."
—Larry Dossey, MD, author of One Mind: How Our Individual Mind Is Part of a Greater Consciousness and Why It Matters

“Mark Ireland is a soulful, intelligent man who brings higher thinking to mediumship, and he shares with us some of his own thought-provoking stories in his book. As a father who has suffered the loss of his own son, he truly understands the importance of reconnection between the living and those who ‘live again.’”
—Allison Dubois, inspiration for the NBC TV series Medium and author of Talk to Me: What the Dead Whisper in Your Ear

“If you expect this book to be sombre and extremely sad, it is not. The journey that the author has travelled since the death of his son in 2004 is quite remarkable. He has taken his original grief and raised it to a positive experience of hope for everyone who has lost someone precious.… [A] varied, educational, and interesting journey.…”
—Tricia J. Robertson, psychic researcher and author of Things You Can Do When You’re Dead

“Messages from the Afterlife is a must-read and will bring comfort and peace to thousands. Another great book from Mark Ireland.”
—John Holland, psychic medium and author of The Spirit Whisperer: Chronicles of a Medium

“In his 2008 book Soul Shift, Mark Ireland explained how he was able to overcome the despair he had experienced from the death of his eighteen-year-old son, Brandon, by his research in the area of mediumship. Seeing others grieving the loss of loved ones, Mark Ireland has dedicated his life to helping others move from disbelief or blind faith to a conviction that those loved ones live on and will someday be reunited with us. In this book, Mark provides more intriguing stories of spirit communication and related phenomena, all of which should help the reader overcome grief and the fear of death.”
—Michael Tymn, editor of the Journal for Spiritual and Consciousness Studies

“Not all books deliver what their titles promise. This one certainly does—and much more. The messages are there, and very impressive many of them are, as is the author’s balance between spiritual seeking and a strictly scientific approach.… [F]ascinating reading.”
—Guy Playfair Lyon, journalist, broadcaster, and author of If This Be Magic and Twin Telepathy

“This is a powerful story of development of a ‘mainstream business-fueled lifestyle’ to one of a deep exploration of life and living. Spurred by the death of a son, Mark Ireland marshals compelling evidence of existence beyond physical death, and records how this knowledge can overcome the grief of the bereaved. It is an important exploration of science, spirituality, religion, and psychic realities.”
—John Poynton, emeritus professor of biology at the University of Natal, South Africa, and past president of the Society for Psychical Research

“I loved this book! Raymond Moody opened the dialogue on NDEs, Brian Weiss did it for past-life memories, Michael Newton for life between lives, the Guggenheims for after-death communications, and now Mark Ireland has done it for mediumship, the capacity of certain individuals to communicate with the spirits of the deceased. Messages from the Afterlife reveals Ireland’s heart-wrenching struggle for spiritual truth following the sudden death of his youngest son, and includes us in his process of discovering how specific details in messages communicated through ethical mediums can promote healing and ease the anguish of people grieving such losses. Ireland makes a convincing case that mediumship has been misunderstood, maligned, and discredited by fraud in the past, but good mediums today can provide even science-minded people with evidence that bridges the “faith gap” between wanting to believe and truly knowing that another spiritual dimension exists—and that our consciousness survives physical death.”
—Jane Katra, PhD, healer, professor of public health, and coauthor of Miracles of Mind and The Heart of the Mind

“Mark Ireland has created another excellent contribution to afterlife research in the book.… Ireland shares unique information about spirit communication, and eloquently addresses pseudo-skepticism and religious piety—two controversial areas that often contribute to the hindrance of spiritual growth.”
—Donna Smith-Moncrieffe, afterlife researcher and author of Medium7: Evidence of the Afterlife and Predictions

“This is the story of a man's opening up to the world of spirits as they help him recover from the death of his son. We meet the mediums he works with and the spirits communicating through them. We listen as he does battle with materialists who dismiss his point of view with contempt. Above all, we get to know a man who wants us to recognize that we have access to a Divine Source within us and that, as he puts it, ‘another realm of being exists beyond this world of physical manifestation.’”
—Stafford Betty, PhD, professor of religious studies at California State University, Bakersfield, and author of The Afterlife Unveiled

"Practical, insightful, and poignant, this book is written from the heart of a grieving parent and the brain of a pragmatic researcher. Whether you're interested in psychic-medium abilities, evidence of life after death, or new ways to comfort your grief, Mark Ireland's story and analysis delivers."
—Bob Olson, AfterlifeTV.com


"Moving consciously through the illusion of 'death' and demystifying it is one of the next big frontiers in our search for an expanded experience of life itself. I am grateful that Mark Ireland, who is such a grounded, articulate, and open-minded explorer, is sharing his firsthand encounters with these higher frequencies of consciousness. Knowing the nophysical realms runs in his blood and it is a real gift to have him as a way-shower."
—Penney Peirce, expert intuitive and author of Leap of Perception andFrequency
or
Not Currently Available for Direct Purchase
Copyright © 2020 American Booksellers Association