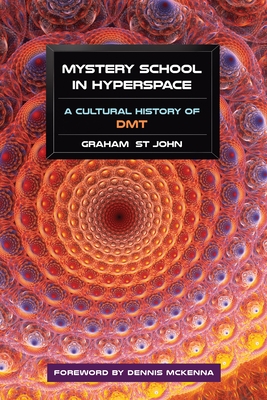 A Cultural History of DMT

Since the mid-1950s, the psychoactive compound DMT has attracted the attention of experimentalists and prohibitionists, scientists and artists, alchemists and hyperspace emissaries. While most known as a crucial component of the “jungle alchemy” that is ayahuasca, DMT is a unique story unto itself. Until now, this story has remained untold. Mystery School in Hyperspace is the first book to delve into the history of this substance, the discovery of its properties, and the impact it has had on poets, artists, and musicians.

DMT has appeared at crucial junctures in countercultural history. William Burroughs was jacking the spice in Tangier at the turn of the 1960s. It was present at the meeting between Ken Kesey's Merry Pranksters and Tim Leary's associates. It guided the inception of the Grateful Dead in 1965. It showed up in Berkeley in the same year, falling into the hands of Terence McKenna, who would eventually become its champion in the post-rave neo-psychedelic movement of the 1990s. Its indole vapor drifted through Portugal's Boom Festival and has been evident at Nevada's Burning Man, where DMT has been adopted as spiritual technology supplying shape, color, and depth to a visionary art movement. The growing prevalence of use is evident in a vast networked independent research culture, and in its impact on fiction, film, music and metaphysics. As this book traces the effect of DMT's release into the cultural bloodstream, the results should be of great interest to contemporary readers.

The book permits a broad reading audience to join ongoing debates in studies in consciousness and theology where the brain is held to be either a generator or a receiver of consciousness. The implications of the "spirit molecule" or "the brain's own psychedelic" among other theories illustrate that DMT may lift the lid on the Pandora's Box of consciousness.

Regarded as the “nightmare hallucinogen” or celebrated as the “spirit molecule,” labelled “psychotogenic” or “entheogenic,” considered a dangerous drug or the suspected X-factor in the evolution of consciousness, DMT is a powerful enigma. Documenting the scientists and artists drawn into its sphere of influence, navigating the liminal aesthetics of the “breakthrough” experience, tracing the novum of “hyperspace” in esoteric and science fiction currents, Mystery School in Hyperspace excavates the significance of this enigmatic phenomenon in the modern world.

Exposing a great many myths, this cultural history reveals how DMT has had a beneficial influence on the lives of those belonging to a vast underground network whose reports and initiatives expose drug war propaganda and shine a light in the shadows. This conversation is highly relevant at a time when significant advances are being made to lift the moratorium on human research with psychedelics.

Praise For Mystery School in Hyperspace: A Cultural History of DMT…

"Meticulously researched and highly readable. St John covers every imaginable aspect of DMT’s place in the Western aesthetic and intellectual landscapes. Setting down his book, I came away with a new appreciation of just how embedded the DMT meme has become."
—Rick Strassman MD, author of DMT: The Spirit Molecule, DMT and the Soul of Prophecy, and clinical associate professor of psychiatry, University of New Mexico School of Medicine

"Graham St John’s book on DMT untangles the threads of this holy molecule, from anthropological antiquity to labs in Hungary, from hipster soothsayers to visionary art at festivals, including some of the best descriptions of the wonderfully weird tryptamine worlds inside all of us. Read Mystery School in Hyperspace and appreciate the miracle in our midst."
—Alex Grey, artist, and author Net of Being

“Combining the breadth of a scholar, the savvy of an underground journalist, and the open spirit of a radical empiricist, Graham St John has written the definitive cultural history of the weirdest molecule on the planet (and in your body). Mystery School in Hyperspace tells amazing tales, sheds light on the shadows, and brilliantly referees the ongoing psychoactive rumble between the sacred and profane.”
—Erik Davis, author of Techgnosis: Myth, Magic, and Mysticism in the Age of Information

"Scholars and psychonauts alike will find much to appreciate in this lucid, thoughtful, provocative, and thoroughly enjoyable cultural history of DMT. Meticulously researched and beautifully written, Mystery School in Hyperspace is remarkable in its deft interweaving of neurochemistry, countercultural thought, spirituality, and the arts. In years to come, anyone with a serious interest in the socio-cultural significance of induced altered states will have read this book."
—Christopher Partridge, Professor of Religious Studies, Lancaster University, UK.

“Mystery School in Hyperspace is the textbook history of DMT for serious students of transdimensional evolution.… Graham St John's tour de force through the tapestry of alchemists, hippies, DJs, scientists, shamans, mystics, and seekers of the mystery that DMT reveals is an exhilarating ride and a thoroughly researched achievement. St John successfully builds up a historical profile of both dimethyltryptamine and the quest to understand it, piercing the mystery to bring back translinguistic trip reports that illuminate the central gnosis of our time. As the latest generation of psychonauts explores the invisible landscape of Terra Incognita, Mystery School in Hyperspace could very well be the map that we have all been looking for."
—Rak Razam, director of Aya: Awakenings

“Boldly going where no one had gone before, Graham St John takes his readers on a properly hallucinatory yet extremely well documented tour through the history of DMT. Analyzing six decades of radical countercultural experimentation and exploration at the limits of human consciousness and beyond, this is a significant contribution to the emerging study of entheogenic religion"
—Wouter J. Hanegraaff, University of Amsterdam

"Wrap your mind around the most ubiquitous and profound psychedelic on the planet, DMT! A multidimensional journey that provides a smorgasbord of information, and will give seasoned psychonauts, dogmatic academics, culture aficionados, and frankly any curious mind, plenty to chew on."
—Mitch Schultz, founder of MYTHAPHI and director of DMT: The Spirit Molecule
or
Buy Here
Copyright © 2020 American Booksellers Association