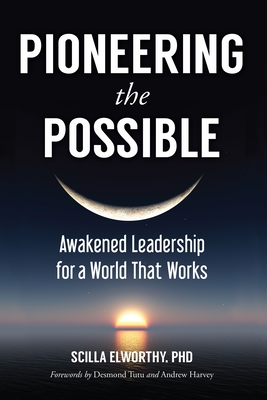 Awakened Leadership for a World That Works (Sacred Activism #7)

Three-time Nobel Peace Prize nominee Dr. Scilla Elworthy, a realist with 40 years' experience at the sharp end of politics and conflict, presents a bold but realistic vision for the future in Pioneering the Possible. Human beings worldwide are anxious, afraid for their children's futures, dissatisfied by their lives, but unsure what to do. Our global ecosystems and supply chains are under threat and our leaders appear to have failed us. Pioneering the Possible addresses these anxieties head-on by envisioning a future that could work for everyone, rich and poor, demonstrating with real-life examples how that future is already emerging. Pioneering the Possible tackles the deeply embedded 20th-century values that get in the way of addressing global problems, and shows how these destructive values can be—and are being—reversed.

We know the world is in crisis: we are spoiling our planet at such a rate that soon it may be unable to sustain human life. This crisis is in fact a vast opportunity, because a secure and satisfying future for all of humanity is perfectly possible if we make the right choices. But building such a future will require the leap in consciousness that Einstein indicated when he said, "No problem can be solved from the consciousness that created it." Pioneering the Possible investigates what this new consciousness is and takes us to meet the leaders who have learned to apply it. With profiles of individuals who exemplify transformative leadership such as Dr. Desmond Tutu and Aung San Suu Kyi, Dr. Elworthy demonstrates how anyone can develop the magnificent inner power to build their own personal contribution to the future and become a 21st-century pioneer of what's possible. The book then contrasts the value systems that underpin our current decisions with the kind of values that would enable us to make better choices—those that could get us out of the mess we're in. To envision the kind of future that is possible—a lift-off into life as it could be—Elworthy calls on some experienced specialists to look through their telescopes into the future, then brings in the pragmatists who know what to do in their fields, because they've done it, tested it, and made it work. Pioneering the Possible ultimately helps you find your unique way to be useful; as Dr. Elworthy says, "to discover your mission and put it into action—instead of worrying on the sidelines—is to find peace of mind and a heart full of love."

Praise For Pioneering the Possible: Awakened Leadership for a World That Works (Sacred Activism #7)…

“Let this book wake you up to your own inner power—the capacity now required to help resolve global problems and build a world that works for all.”
—Archbishop Desmond Mpilo Tutu, Nobel Peace Prize Laureate

“A work of lasting impact. Visionary is much too small a word to describe Scilla Elworthy.… Alongside an empathetic analysis of ‘some of the giants who have shown the way,’ this wise woman—herself a towering figure—offers readers a huge and motivating gift: an explanation of how ordinary individuals can change the world, and why they must wake up and do it.”—Ambassador Swanee Hunt, chair and founder  of the Institute for Inclusive Security; Eleanor Roosevelt Lecturer of Public Policy, Harvard Kennedy School of Government

“They say it is better to light a candle than curse the dark. In this great book Scilla Elworthy sets the context of where we are as a society and shines a veritable searchlight on many practical and positive suggestions to some of today’s most intractable problems. A must-read for all those who want to be part of the solution!”—Lawrence Bloom, former chairman of the World Economic Forum, Global Agenda Council on Urban Management

“We need women like Scilla Elworthy to challenge us to reorder our perspectives by drawing on the feminine in us all, including men, and finding the balance between ‘… the psychological and the political, between reflection and action’ so vital to a new world in which peace, equity, and justice might prevail.”—Jane Tewson, CBE, cofounder of Comic Relief

“This is a book about radical leadership; it will give you the essential skills and inner power to help build a world that works for all, and to have a great time doing it.”—Chade-Meng Tan, Jolly Good Fellow of Google and author of Search Inside Yourself

“This book by Scilla Elworthy is worthy of a strong push from all of us. If we are to create a sustainable civilization at his point in history (and we must, in order to survive) it is precisely this thinking and writing that must prevail.”—Edgar Mitchell, ScD, NASA astronaut, pilot of Apollo 14

Three-time Nobel Peace Prize nominee SCILLA ELWORTHY, PhD, founded the Oxford Research Group in 1982 to develop effective dialogue between nuclear weapons policy-makers worldwide and their critics. Their work included a series of dialogues between Chinese, Russian, and NATO nuclear scientists and the military, which formed the basis for later treaties. She founded Peace Direct in 2002 to fund, promote, and learn from local peace-builders in conflict areas, leading to the UN accepting the value and cost effectiveness of "locally-led" initiatives. Elworthy was awarded the Niwano Peace Prize in 2003. She was adviser to Peter Gabriel, Desmond Tutu, and Richard Branson in setting up The Elders and currently advises the boards of major international companies on future planning. She's chair of the Civil Society sector of the Hanwang Forum in China; a Councillor of the World Future Council; author of numerous books; a patron of Gender Rights and Equality Action Trust, MasterPeace, Oxford Research Group; and a member of the steering Committee of PAX, a service to help prevent wars and genocides. She received the Lifetime Achievement Award presented at the Voice of a Woman ceremony in July 2013.
Loading...
or
Not Currently Available for Direct Purchase