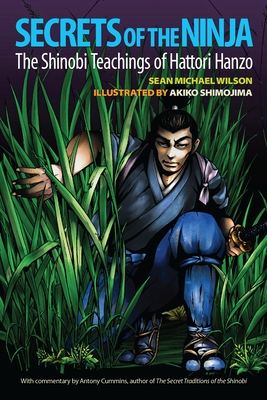 Secrets of the Ninja (Paperback)

The Shinobi Teachings of Hattori Hanzo

This historically grounded manga follows the ninja Nagata Saburo as he teaches his son, Hisaaki, the weapons, secret tactics, and values of the ninja. Based on the real-life writings of the famous ninja Hattori Hanzo, Secrets of the Ninja combines a familiar coming-of-age story with a historically accurate background of political intrigue and Sengoku-period Japanese culture. As Hisaaki grows from boy to man, Wilson skillfully interweaves real lessons, weapons, and skills used by ninja in feudal Japan, depicted with detail by artist Akiko Shimojima.

All of the tactics Saburo teaches to his son are drawn from the Shinobi Hiden, the most famous of the "ninja scrolls" written by Hattori Hanzo, general to the warlord Tokugawa Ieyasu and one of the most famous warriors in Japan. These scrolls provided practical instruction for professional ninja, but they also provide insightful theories of social relationships and human interaction, studying the nature of deception, falsehood, and self-protection. An extensive supplementary section written by Antony Cummins provides fascinating details on these scrolls and their practical lessons. Accessible, insightful, and exciting, Secrets of the Ninja is the perfect introduction to the world of samurai and shinobi warfare.

SEAN MICHAEL WILSON is a Harvey- and Eisner-award-nominated comic book writer who has authored more than a dozen graphic novels and manga comics, including adaptations of The Book of Five Rings and The 47 Ronin. He is also the editor of the critically acclaimed anthology AX: A Collection of Alternative Manga (one of Publishers Weekly's "Best Ten Books of 2010"). Originally from Scotland, he now lives in Japan.

AKIKO SHIMOJIMA is a comic and manga artist from Tokyo, Japan. A teacher of digital comics art at a school in Tokyo, she is the illustrator of The 47 Ronin and has contributed work to many other publications.

ANTONY CUMMINS is the author of The Secret Traditions of the Shinobi and True Path of the Ninja, among other books. He has also worked as a historical consultant on TV documentaries such as Ninja Shadow Warriors and Samurai Head Hunters. More information can be found at his website, www.natori.co.uk.
or support indie stores by buying on
Copyright © 2020 American Booksellers Association