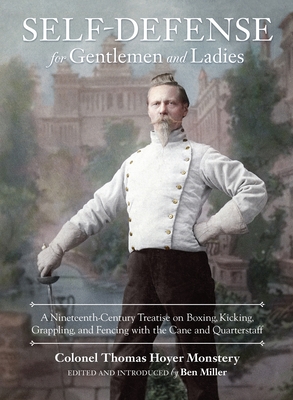 Self-Defense for Gentlemen and Ladies

A Nineteenth-Century Treatise on Boxing, Kicking, Grappling, and Fencing with the Cane and Quarterstaff

This 19th-century self-defense manual—written by a master swordsman—will appeal to fencers and martial artists as well as fans of Victorian-era culture, steampunk, and American history

Colonel Thomas Hoyer Monstery was a master swordsman who participated in more than fifty duels, fought under twelve flags, battled gangsters, and was constantly involved in the great conflicts and upheavals of his time. In the 1870s, he began writing his magnum opus—a series of newspaper articles that are now collected here for the first time in Self-Defense for Gentleman and Ladies.

In this book, Colonel Monstery presents a unique look into the Victorian-era fighting world. He describes styles such as British “purring” (shin-kicking), Welsh jump-kicking, and American rough-and-tumble fighting, in addition to providing illustrated instruction in the art of gentlemanly self-defense with a cane, staff, or one’s bare hands. Fifty rare drawings and photographs from the period illuminate Monstery’s world, while an extensive glossary of terms and an introductory biography of Colonel Monstery—including fascinating details of his many duels as well as his groundbreaking devotion to teaching fencing and self-defense skills to women—update his text to make it accessible and useful to gentlemen and ladies of any era.

Contents
Colonel Thomas Hoyer Monstery: The Unknown American Martial Arts Master
I. Introduction.
II. The Logic of Boxing.
III. Standing and Striking.
IV. Advancing to Strike and Feinting.
V. Simple Parries in Boxing.
VI. Parries with Returns.
VII. Effective or Counter Parries in Boxing.
VIII. Offence and Defense by Evasions.
IX. Trips, Grips, and Back-Falls.
X. Rules for a Set-to with Gloves.
XI. Observations on Natural Weapons.
XII. The Use of the Cane.
XIII. The Use of the Cane (continued).
XIV. The Use of the Staff.
XV. The Use of the Staff (continued).
Appendix: Monstery's Rules for Contests of Sparring and Fencing
Glossary

Praise For Self-Defense for Gentlemen and Ladies: A Nineteenth-Century Treatise on Boxing, Kicking, Grappling, and Fencing with the Cane and Quarterstaff…

“This is not just another ‘martial arts how-to book’ but a gem of historical literature on physical fitness and methods of self-defense.”—Maestro Ramon Martinez, Martinez Academy of Arms

BEN MILLER is an award-winning filmmaker and author. He is a graduate of NYU's Tisch School of the Arts, was the winner of the Alfred P. Sloan Foundation Grant for screenwriting, and has worked for legends such as Martin Scorsese and Roger Corman. He was the producer of the film Rage and Discipline, about pugilists in New York City. Miller's movies have appeared on Walt Disney Video, Sony Video, BET, HBO, Cinemax, and the Encore Channel. He currently serves as chef de salle at the Martinez Academy of Arms, one of the last schools in the world still teaching an authentic living tradition of classical fencing. He is active in the Association of Historical Fencing, and has written several articles for them focusing on the fencing and dueling of the American colonial period.
Loading...
or
Not Currently Available for Direct Purchase