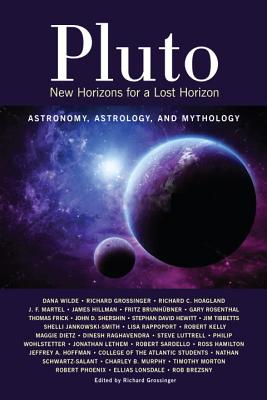 New Horizons for a Lost Horizon: Astronomy, Astrology, and Mythology

Encompassing astronomy, mythology, psychology, and astrology, Pluto offers a wealth of knowledge about our most famous dwarf planet. First observed in 1930 and once defined as the ninth and final planet in our solar system, Pluto and its discovery and reclassification throw a unique light on how we generate meaning in science and culture. This anthology, timed to appear in concordance with NASA’s New Horizons's approach to Pluto in July 2015, shows that while the astronomical Pluto may be little more than an ordinary escaped moon or tiny Kuiper Belt object, it is a powerful hyperobject, for its mythological and cultural effigies on Earth incubate deep unconscious seeds of the human psyche.

Certain astronomical features pertain to Pluto in terms of its distance from the Sun, coldness, and barrenness. These also inform its mythology and astrology as befitting a planet named after the God of the Underworld. Among the issues central to this collection are the meanings of darkness, loss, grief, inner transformation, rebirth, reincarnation, and karmic revelation, all of which are associated with the astrology of Pluto. Pluto also embodies the meaning of true wealth as being nonmaterial essence instead of property, conventional accolades, ego identity, achievement. It is the marker of negative capability.

Since the issuing of Solar Journal: Oecological Sections by Black Sparrow Press in 1970, RICHARD GROSSINGER has published some 35 books, most of them with his own press, North Atlantic Books, but also titles with Harper, Doubleday, Sierra Club Books, and J. P. Tarcher. These have ranged from long explorations of science, culture, and spirituality (Dark Pool of Light, Planet Medicine, Embryogenesis) to memoirs (New Moon) to experimental prose (Book of the Earth and Sky) and science fiction (Mars: A Science Fiction Vision). Grossinger received a PhD in anthropology from the University of Michigan in 1975 and lives with his wife, writer Lindy Hough, in Portland, Maine.

Praise For Pluto: New Horizons for a Lost Horizon: Astronomy, Astrology, and Mythology…

“This richly and diversely celebratory collection gives us back Pluto, previously and sadly consigned to historical triviality by a one-dimensional science mind that reclassifies it as not even a planet but a dwarf, mere sky fuzz. Grossinger’s assemblage and introductory remarks show us how and why we never consented to let it go, in fact could not dispense with it, given the profound place it holds in individual and collective mind. Pluto, like death itself, is interactive with self-realization, an essential dynamic within our range of sciences, systems, psychologies, and arts, critical to our thinking. A book that clarifies while inevitably complexifying, it’s one to read on sleepless moonless nights which open sky mind to its further reaches, where Pluto lives to die another day.”
—George Quasha, author of Axial Stones: An Art of Precarious Balance and Glossodelia Attrace (preverbs)

“Plutonic thrills galore underlying everything, this anthology is a blue- or blackprint for someone’s new onyx and translucent Pluto-world Moby Dick, relegating poor old Ken to some unimaginably darker, colder Kuiper belt, teeth chattering … me and Pluto howling at every passing moon.”
—Kenneth Rosen, author of The Origins of Tragedy
or
Not Currently Available for Direct Purchase
Copyright © 2020 American Booksellers Association