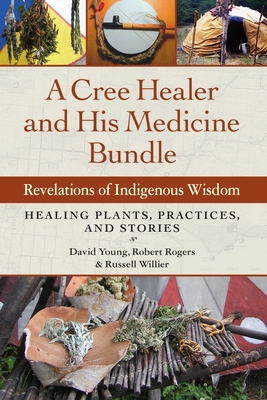 A Cree Healer and His Medicine Bundle

With the rise of urban living and the digital age, many North American healers are recognizing that traditional medicinal knowledge must be recorded before being lost with its elders. A Cree Healer and His Medicine Bundle is a historic document, including nearly 200 color photos and maps, in that it is the first in which a native healer has agreed to open his medicine bundle to share in writing his repertoire of herbal medicines and where they are found. Providing information on and photos of medicinal plants and where to harvest them, anthropologist David E. Young and botanist Robert D. Rogers chronicle the life, beliefs, and healing practices of Medicine Man Russell Willier in his native Alberta, Canada. Despite being criticized for sharing his knowledge, Willier later found support in other healers as they began to realize the danger that much of their traditional practices could die out with them.

With Young and Rogers, Willier offers his practices here for future generations. At once a study and a guide, A Cree Healer and His Medicine Bundle touches on how indigenous healing practices can be used to complement mainstream medicine, improve the treatment of chronic diseases, and lower the cost of healthcare. The authors discuss how mining, agriculture, and forestry are threatening the continued existence of valuable wild medicinal plants and the role of alternative healers in a modern health care system. Sure to be of interest to ethnobotanists, medicine hunters, naturopaths, complementary and alternative health practitioners, ethnologists, anthropologists, and academics, this book will also find an audience with those interested in indigenous cultures and traditions.

Praise For A Cree Healer and His Medicine Bundle: Revelations of Indigenous Wisdom--Healing Plants, Practices, and Stories…

“What a profound gift Russell Willier has given to the world, with the help and support of his friends, colleagues and researchers anthropologist David Young and ethnobotanist and herbalist Robert Dale Rogers! The depth of Mr. Willier’s knowledge and experience about healing plants and their properties is matched only by his kindness and generosity in sharing this knowledge and the strength of the personal bonds lasting over decades that allowed the creation of this book. The book is unique in the partnerships that it reflects, in the compellingly personal way the knowledge is presented, and in the ties of each special featured healing plant to a particular place, habitat, and season: truly place-based knowledge and practice. Balancing the need to safeguard and respect this knowledge with the concerns that the teachings will be lost to younger generations if it is not recorded, this book reveals sacred knowledge yet also cautions us against its misuse. Key to the book is the understanding that medicinal treatments are deeply embedded in our emotional and psychological condition, and that human health and well-being are completely dependent on the health of other species and of the environment as a whole.”
—Nancy Turner, PhD, professor, University of Victoria, and renowned ethnobotanist and leading expert on First Nations use of medicinal plants of the Pacific Northwest

“While the medicinal plants discussed here are generally well known, what is most interesting is the various discussions of why certain plants are useful for certain medical problems. This is a significant contribution to understanding Native American, and particularly Cree, medical knowledge.”
—Daniel Moerman, PhD, professor emeritus, University of Michigan, and renowned medical anthropologist and leading research on Native American ethnobotany

ROBERT DALE ROGERS, BSc, RH/AHG, FICN, has been a student of native plants and fungi from the Canadian prairies for more than forty years. He is a retired clinical herbalist, amateur mycologist, and professional member of the American Herbalist Guild. Rogers is an assistant clinical professor in family medicine at the University of Alberta. His over 20 books and ebooks may be found at www.amazon.com/author/robertdalerogers. They involve the traditional use of plants and fungi of the boreal forest with special attention to application by aboriginal healers. Rogers teaches plant medicine at Grant MacEwan University and the Northern Star College of Mystical Studies in Edmonton (www.northernstarcollege.com). He is a consultant to the herbal, mycological, and nutraceutical industries, is currently chair of the medicinal mushroom committee of the North American Mycological Association, and is on the editorial board of the International Journal of Medicinal Mushrooms. Rogers lives in Edmonton, Canada with his wife, Laurie. You can visit their webpage at www.selfhealdistributing.com.

RUSSELL WILLIER was born on the Sucker Creek Reserve in northern Alberta. He grew up in a large family of twelve brothers and sisters. His father was a skilled hunter and trapper who passed his knowledge about the traditional Woods Cree way of life on to his son. Willier attended Catholic mission school but quit in order to help his parents on the family farm. Even at an early age, Russell showed signs of having been selected by the Spirit World to be a healer, but he resisted for many years. Eventually, he accepted this responsibility and received the medicine bundle of his great grandfather, Moostoos, a well-known healer in the area and signer of Treaty 8. By the time Willier received his medicine bundle, the knowledge of how to use the little plant packets inside it had been lost, so Russell showed them to elders and asked if they knew how these “combinations” were used. Gradually, over many years, Russell pieced together the information he needed to begin practice as a Medicine Man. Willier, who still lives on the Sucker Creek Reserve, travels extensively to treat those who call upon him for help.
Loading...
or
Not Currently Available for Direct Purchase