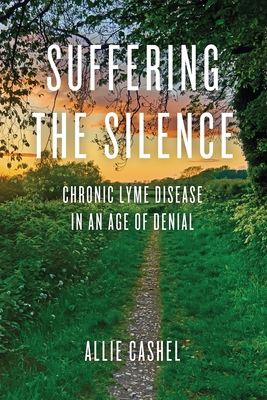 Chronic Lyme Disease in an Age of Denial

Allie Cashel has suffered from chronic Lyme disease for sixteen years—but much of the medical community refuses to recognize her symptoms as the result of infectious disease. In Suffering the Silence: Chronic Lyme Disease in an Age of Denial, Cashel paints a living portrait of what is often called post-treatment Lyme syndrome, featuring the stories of chronic Lyme patients from around the world and their struggle for recognition and treatment.

In the United States alone, at least 300,000 people are diagnosed with Lyme disease each year, and it is estimated that 20 percent of them go on to develop chronic symptoms of the disease, including (but not limited to) muscle and joint pain; digestive problems; extreme fatigue, confusion, and dizziness; sensations of burning and numbness; and immune-system dysfunction. Before reaching a final diagnosis, many of these patients are misdiagnosed with diseases and conditions like lupus, multiple sclerosis, fibromyalgia, chronic fatigue syndrome, depression, anxiety, and even dementia. Despite these numbers and routine misdiagnoses, The Centers for Disease Control and Prevention (CDC) and Infectious Diseases Society of America (IDSA) claim it is impossible for the Lyme bacteria to survive in the body after standard antibiotic therapy. For these chronic patients who have their suffering routinely dismissed by doctors—and even family and friends—the social effects of the illness can be as crippling as the disease itself. Suffering the Silence is a personal and provocative call to break the stigma and ignorance that currently surrounds chronic Lyme disease and other misunderstood chronic illnesses—but it is also a message of hope and comfort for Lyme sufferers, encouraging them to share their stories, seek out treatment, and remember that they are not alone.

Allie Cashel was first diagnosed with Lyme disease in June of 1998; she has been a sufferer of Lyme, Babesiosis, Ehricliosis, and Bartonellosis for sixteen years. While studying at Bard College, she conducted a series of interviews with Chronic Lyme patients in New York and around the world, revealing a complex world of suffering within the Lyme community. Cashel now works as a passionate advocate for increased awareness of Lyme disease: she is on the Junior Board of the Tick Borne Disease Alliance, guest lectures at Bard College about her work, and has created the online community "Suffering the Silence" to build awareness around Lyme and other tick-borne illnesses.
or
Not Currently Available for Direct Purchase