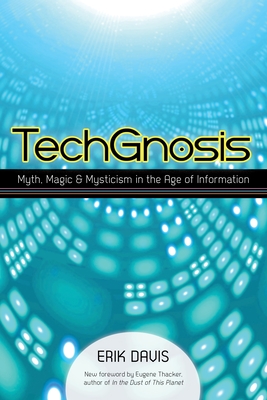 Myth, Magic, and Mysticism in the Age of Information

How does our fascination with technology intersect with the religious imagination? In TechGnosis—a cult classic now updated and reissued with a new afterword—Erik Davis argues that while the realms of the digital and the spiritual may seem worlds apart, esoteric and religious impulses have in fact always permeated (and sometimes inspired) technological communication. Davis uncovers startling connections between such seemingly disparate topics as electricity and alchemy; online roleplaying games and religious and occult practices; virtual reality and gnostic mythology; programming languages and Kabbalah. The final chapters address the apocalyptic dreams that haunt technology, providing vital historical context as well as new ways to think about a future defined by the mutant intermingling of mind and machine, nightmare and fantasy.

Praise For TechGnosis: Myth, Magic, and Mysticism in the Age of Information…

“TechGnosis is an essential work, tracing the co-evolution of technology with the urge for transcendence. It helps put today's obsession with the singularity and post-human consciousness into perspective, without condemning them as mere symptoms of millenarian fantasy nor worshipping at the altar of the eschaton.”
—Douglas Rushkoff, author of Present Shock

“Erik Davis has written one of the best media studies books ever published. There’s never been a more lucid analysis of the goofy, muddled, superstition-riddled human mind, struggling to come to terms with high technology. Unlike most tomes about tech, the occult, and social theory, TechGnosis is literate, accessible, and funny. A real winner all around!”
—Bruce Sterling, author of Gothic High-Tech and The Epic Struggle of the Internet of Things

“TechGnosis is stimulating and original, learned and readable. Erik Davis offers a wide-ranging and consistently thought-provoking guide to the hidden circuitry of the technological unconscious. Invaluable.”
—Geoff Dyer, author of Yoga for People Who Can’t Be Bothered to Do It

“Erik Davis’s compendious recitation of the history of communications technology dominates the discursive landscape of techno-exegesis like a Martian war machine. In the grand style of H. G. Wells, TechGnosis is an apocalyptic synopsis of technological climax.”
—Terence McKenna, author of The Archaic Revival

“TechGnosis is a dazzling, sweeping look at the metaphysical urges underlying our technological progress. From exploring the Singularity to positioning man as the “spiritual cyborg,” Erik Davis reveals our technological subconscious and writes with a flair that crackles the mind. I love this book.”
—Jason Silva, Emmy-nominated host of National Geographic channel's BrainGames and creator of Shots of Awe

“Before The Matrix, there was TechGnosis—the classic and still-pioneering text on the historical and creative interfaces between the technological, the magical, and the mystical.”
—Jeffrey J. Kripal, author of Mutants and Mystics: Science Fiction, Superhero Comics, and the Paranormal

“TechGnosis is a tour de force of scholarship, insight, and juicy writing. Like McLuhan, Erik Davis sheds light on the shadows—the places we’ve neglected to look, or have feared to look, in our search for the meaning of human invention.”
—Howard Rheingold, author of The Virtual Community: Homesteading on the Electronic Frontier

“TechGnosis is a delirious and exhilarating exploration of the metascapes of new mind and new nature. Pungent and profound, the writing is pure alchemy, and the reader is redesigned in the very act of reading. This is perhaps the best book written on where we are going and how we got there.”
—Jean Houston, author of A Mythic Life

“TechGnosis is a masterpiece of informed polemic, welding seemingly disparate blocks of knowledge and thought into a coherent, challenging whole with passion, erudition and wit.”
—The Independent

“Religion constitutes the perfect content provider (it's already virtual) and techgnosis makes the perfect religion for a world where Capital is god. But before you sign up to download your consciousness, better read Erik Davis.”
—Hakim Bey, author of T.A.Z.

“Davis takes on subjects that would appear to be ridiculous in the hands of a lesser writer and renders them appropriately sublime.”
—R. U. Sirius, cofounder and editor of Mondo 2000

“TechGnosis is at once an EEG of our silicon unconscious and a recovered memory of sacred technologies. Erudite but wired to the eyeballs, Davis is that rare blend: a postmodern classicist, equally at home with ancient automata and alien autopsies. A true believer in the politics of myth, he’s mindful, nonetheless, of the social issues that haunt our techno-eschatologies. Erik Davis is the perfect tour guide to our Disneyland of the Gods.”
—Mark Dery, editor of Flame Wars and author of Escape Velocity and I Must Not Think Bad Thoughts

“I guess you could say Erik Davis is a secret agent of informational change, but make sure you have your mirror shades on, 'cause the information is crisp and thoughtful, sharp as a monomolecular razor, and basically just straight up ridiculously well researched—all while being accessible and fun to read. Not since Jeremy Campbells's groundbreaking Grammatical Man have we had as diverse and engaging a book on the linkages of information and culture, and how the two shape and mold each other. Davis's book cuts through the jargon and empty rhetoric of electro-theory and goes beyond all the clichés of a culture of total amnesia. A new Rosetta Stone for the Digerati.”
—Paul Miller aka DJ Spooky

“Davis performs alchemy, fusing disparate strands of techno-hype, mystical speculation, and hard-nosed reporting into a Philosopher's Stone, unlocking secrets our culture doesn't even know it has. Like Greil Marcus, Davis is readable when the thinking gets heavy and in touch with pop culture without being overwhelmed by trivia. TechGnosis is written smart, and far more rare, written well.”
—Peter Lunenfeld, professor at UCLA Design | Media Arts, author of The Secret War Between Downloading and Uploading

ERIK DAVIS is a scholar, journalist, and public speaker best known for his cultural analysis and creative explorations of esoteric mysticism. Davis has written about music, art, film, pop culture, and technology for Spin, Details, Rolling Stone, and Wired magazines. He is the author of Led Zeppelin IV (2005), The Visionary State: A Journey Through California's Spiritual Landscape (2006), and Nomad Codes: Adventures in Modern Esoterica (2010), and co-edited The Exegesis of Philip K. Dick (2011). Davis has appeared in a number of documentaries about technology and countercultural topics, including DMT: The Spirit Molecule, Electronic Awakening, and The Source. Along with Maja D'Aoust, he hosts a weekly podcast devoted to the "cultures of consciousness" called Expanding Mind, which is part of the Progressive Radio Network.
Loading...
or support indie stores by buying on
(This book is on backorder)