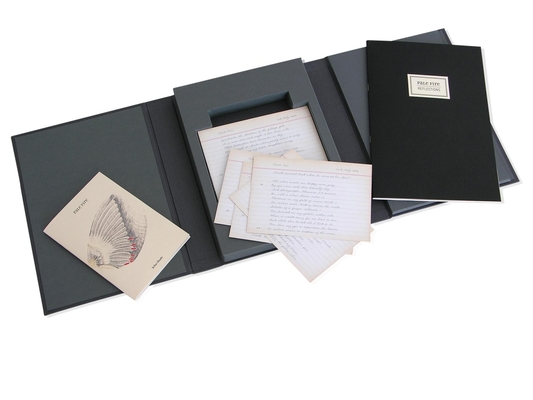 A Poem in Four Cantos by John Shade

Many think Pale Fire Vladimir Nabokov's greatest novel. At its heart beats the 999-line poem, "Pale Fire," penned by the distinguished American poet John Shade. This first-ever facsimile edition of the poem shows it to be not just a fictional device but a masterpiece of American poetry, albeit by an invented persona -- "the greatest of invented poets," according to Nabokov's own accurate evaluation.

This attractive box contains two booklets, the poem "Pale Fire" in a handsome pocket edition and the book of essays by renowned Nabokov authority Brian Boyd and poet R.S. Gwynn, as well as facsimiles of the index cards that John Shade (like his maker, Nabokov) used for composing his poem, printed exactly as Vladimir Nabokov described them. Artist Jean Holabird, who conceived the project, illustrates key details of the poem's pattern and pathos.

2 Paperback Books in a deluxe box.