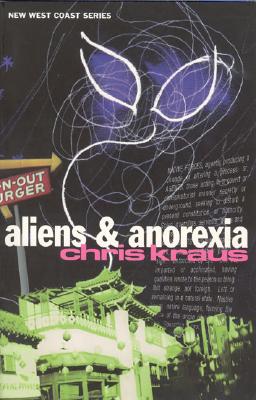 As the rope was tightening around my neck, an Alien made love to me. Belief is a technology for softening the landscape. The world becomes more beautiful when God is in it. Here is what happens inside a person's body when they starve.Written in the shadow of Georg Buchner's Lenz at razor pitch, Aliens & Anorexia, first published in 2000, defines a female form of chance that is both emotional and radical. The book unfolds like a set of Chinese boxes, using stories and polemics to travel through a maze that spirals back into itself. Its characters include Simone Weil, the first radical philosopher of sadness, the artist Paul Thek, Kraus herself, and "Africa," her virtual S&M partner who's shooting a big-budget Hollywood film in Namibia while Kraus holes up in the Northwest Woods for the winter to chronicle the failure of Gravity & Grace, her own low-budget independent film.In Aliens & Anorexia, Kraus argues for empathy as the ultimate perceptive tool, and reclaims anorexia from the psychoanalytic girl-ghetto of poor "self-esteem." Anorexia, Kraus writes, could be an attempt to leave the body altogether: a rejection of the cynicism this culture hands us through its food.