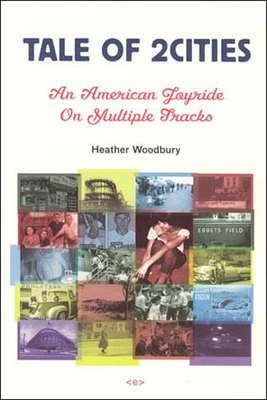 From Brooklyn to Chavez Ravine, 50 years of New York and Los Angeles history collide in a mix of voices from three generations in this living novel by Heather Woodbury.

In this second living novel by Heather Woodbury, 50 years of New York and Los Angeles history collide in a live mix spun by Manny, a young DJ, in his dead grandmother's Echo Park apartment. Flashing back to 1957, when Brooklyn lost its home-team and LA's Chavez Ravine was razed to build the Dodgers a new stadium, Woodbury enacts a's ance among three generations of interwoven characters on both coasts whose lives were changed forever by this single act of urban redevelopment. Writing about a performance of 2Cities in Time Out, David Cote says: Think of the expansive social criticism of John Dos Passos's USA tempered by the loopy humanity of Lily Tomlin. Using her trademark meta-mix of voices, Woodbury links psychic devastation of Brooklyn fans after the desertion of the Dodgers with the fate of Chavez Ravine, where Mexican Americans in a thriving community were forced to sell their homes to make room for the new stadium. Toggling between 1957 and the present, 2Cities swoops through cities and the minds of a miniseries-worth of major and minor characters. From the rise of Senator Joseph McCarthy to the fall of the Twin Towers, 2Cities channels a lost universe of lives otherwise erased, in a style that owes as much to DJ Shadow as it does to John Steinbeck.

Heather Woodbury is the author of the critically acclaimed What Ever, which began as a ten-hour theater phenomenon and was adapted as a radio play, excerpts of which were heard on Ira Glass's This American Life. Woodbury's legendary serial dramas were a highlight of the East Village club scene of the 1980s. A fully-staged version of Tale of 2Cities, which won a Kennedy Award for play writing, will have its premiere in Fall 2006 at PS 122 in New York City.
Loading...
or
Not Currently Available for Direct Purchase