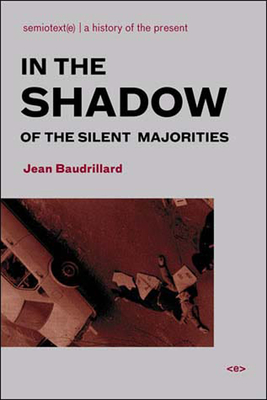 In the Shadow of the Silent Majorities (Semiotext(e) Foreign Agents)

Published one year after Forget Foucault, In the Shadow of the Silent Majorities (1978) may be the most important sociopolitical manifesto of the twentieth century: it calls for nothing less than the end of both sociology and politics. Disenfranchised revolutionaries (the Red Brigades, the Baader-Meinhof Gang) hoped to reach the masses directly through spectacular actions, but their message merely played into the hands of the media and the state. In a media society meaning has no meaning anymore; communication merely communicates itself. Jean Baudrillard uses this last outburst of ideological terrorism in Europe to showcase the end of the Social. Once invoked by Marx as the motor of history, the masses no longer have sociological reality. In the electronic media society, all the masses can do--and all they will do--is enjoy the spectacle. In the Shadow of the Silent Majorities takes to its ultimate conclusion the end of ideologies experienced in Europe after the Soviet invasion of Hungary and the death of revolutionary illusions after May 1968. Ideological terrorism doesn't represent anything anymore, writes Baudrillard, not even itself. It is just the last hysterical reaction to discredited political illusions.