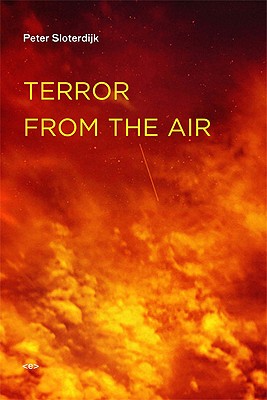 Terror from the Air

According to Peter Sloterdijk, the twentieth century started on a specific day and place: April 22, 1915, at Ypres in West Flanders. That day, the German army used a chlorine gas meant to exterminate indiscriminately. Until then, war, as described by Clausewitz and practiced by Napoleon, involved attacking the adversary's vital function first. Using poison gas signaled the passage from classical war to terrorism. This terror from the air inaugurated an era in which the main idea was no longer to target the enemy's body, but their environment. From then on, what would be attacked in wartime as well as in peacetime would be the very conditions necessary for life.

This kind of terrorism became the matrix of modern and postmodern war, from World War I's toxic gas to the Nazi Zyklon B used in Auschwitz, from the bombing of Dresden to the attack on the World Trade Center. Sloterdijk goes on to describe the offensive of modern aesthetics, aesthetic terrorism from Surrealism to Malevich--an "atmo-terrorism" in the arts that parallels the assault on environment that had originated in warfare.

Peter Sloterdijk (b. 1947) is one of the best known and widely read German intellectuals writing today. His 1983 publication of Critique of Cynical Reason (published in English in 1988) became the best-selling German book of philosophy since World War II. He became president of the State Academy of Design at the Center for Art and Media in Karlsruhe in 2001. He has been cohost of a discussion program, Das Philosophische Quartett (Philosophical Quartet) on German television since 2002.
Loading...
or
Not Currently Available for Direct Purchase