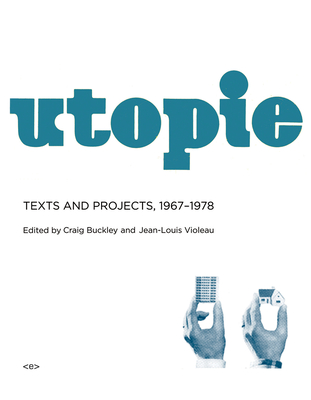 Key writings and projects from the group of architects, sociologists, and urbanists known as Utopie.

The short-lived grouping of architects, sociologists, and urbanists known as Utopie, active in Paris from 1967 to 1978, was the product of several factors: the student protests for the reform of architectural education, the unprecedented expansion and replanning of the Parisian urban fabric carried out by the government of Charles de Gaulle, and the domestication of military and industrial technologies by an emerging consumer society. The group's collaborative publications included the work of Jean Aubert, Isabelle Auricoste, Jean Baudrillard, Catherine Cot, Charles Goldblum, Jean-Paul Jungmann, Henri Lefebvre, Ren Lourau, Antoine Stinco, and Hubert Tonka. Offering a militant alternative to professional urban planning journals, these writers not only formulated a critique of the technocratic and administrative rule over a disabled and alienated urban society but also projected an ephemeral urban poetics. With ties to the Ecole Nationale Sup rieure des Beaux-Arts (ENSBA) in central Paris and to the sociology department established by Henri Lefebvre at the suburban campus of Nanterre, the group challenged postwar modernization and urban planning and questioned the roles into which architects, sociologists, and urban planners had been cast. Utopie makes the group's diverse body of theoretical work accessible in English for the first time, offering translations of more than twenty key texts. Designed in a facsimile format that follows the innovative graphic layouts of the journals, pamphlets, posters, and articles produced by Utopie, the volume not only provides the first thorough overview of the group's activities but also seeks to capture Utopie's linkage of architectural and urban theory to radical publication strategies.