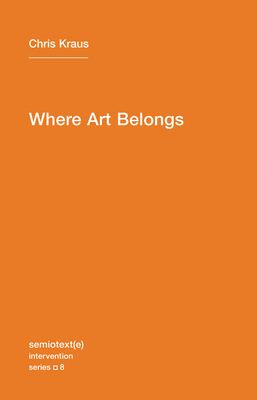 Chris Kraus examines artistic enterprises of the past decade that reclaim the use of lived time as a material in the creation of visual art.

In Where Art Belongs, Chris Kraus examines artistic enterprises of the past decade that reclaim the use of lived time as a material in the creation of visual art. In four interlinked essays, Kraus expands the argument begun in her earlier book Video Green that "the art world is interesting only insofar as it reflects the larger world outside it." Moving from New York to Berlin to Los Angeles to the Pueblo Nuevo barrio of Mexicali, Kraus addresses such subjects as the ubiquity of video, the legacy of the 1960s Amsterdam underground newspaper Suck, and the activities of the New York art collective Bernadette Corporation. She examines the uses of boredom, poetry, privatized prisons, community art, corporate philanthropy, vertically integrated manufacturing, and discarded utopias, revealing the surprising persistence of microcultures within the matrix. Chronicling the sometimes doomed but persistently heroic efforts of small groups of artists to reclaim public space and time, Where Art Belongs describes the trend towards collectivity manifested in the visual art world during the past decade, and the small forms of resistance to digital disembodiment and the hegemony of the entertainment/media/culture industry. For all its faults, Kraus argues, the art world remains the last frontier for the desire to live differently.

Chris Kraus is the author of Video Green: Los Angeles Art and the Triumph of Nothingness (2004) and the novels Aliens and Anorexia (2000), I Love Dick (new edition, 2006), and Torpor (2006), all published by Semiotext(e). The 2007 recipient of the Frank Mather Award in Art Criticism and a 2010 Warhol Foundation Arts Writer's grant, she has taught art writing in graduate programs at University of California, Irvine, European Graduate School, Art Center College, and Columbia College Chicago.
or support indie stores by buying on
Copyright © 2020 American Booksellers Association