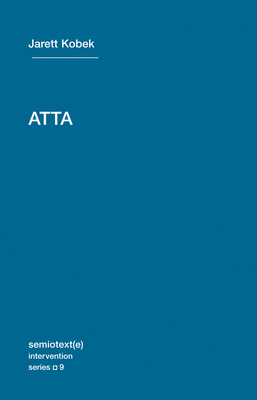 A disorienting fictionalized portrayal of 9/11 mastermind Mohamed Atta and the meaning of madness.

Ours is a century of fear. Governments and mass media bombard us with words and images: desert radicals, "rogue states," jihadists, WMDs, existential enemies of freedom. We labor beneath myths that neither address nor describe the present situation, monstrous deceptions produced by a sound bite society. There is no reckoning of actuality, no understanding of the individual lives that inaugurated this echo chamber.

In the summer of 1999, Mohamed Atta defended a master's thesis that critiqued the introduction of Western-style skyscrapers in the Middle East and called for the return of the "Islamic-Oriental city." Using this as a departure point, Jarett Kobek's novel ATTA offers a fictionalized psychedelic biography of Mohamed Atta that circles around a simple question: what if 9/11 was as much a matter of architectural criticism as religious terrorism? Following the development of a socially awkward boy into one of history's great villains, Kobek demonstrates the need for a new understanding of global terrorism. Joined in this volume by a second work, "The Whitman of Tikrit"--a radical reimagining of Saddam Hussein's last day before capture--ATTA is a brutal, relentless, and ultimately fearless corrective to ten years of propaganda and pandering.

Jarett Kobek is the son of a Turkish immigrant and a graduate of New York University's Gallatin School of Individualized Study. His Pushcart Prize-nominated fiction has been anthologized alongside Haruki Murakami and F. X. Toole. His first novel was commissioned and published by Book Works of London as part of the experimental literature Semina series. He lives in California.
Loading...
or
Not Currently Available for Direct Purchase